Soap operas are some of the most dramatic shows on television, with storylines featuring dark secrets, betrayals, love affairs and family tragedies. But despite these typically somber plots, some of the most popular soap operas will still have an impressive millions of viewers a week. While many popular soap operas began as radio programs — many of which were sponsored by soap companies, leading to the name of the genre — they quickly became a television staple beginning as early as the 1960’s.

With such long-running programs like The Young and the Restless, G eneral Hospital, and Days of Our Lives, it’s no surprise that some of Hollywood’s most famous stars have graced the small screen over time. In fact, some of your favorite stars got their big break on primetime soap operas, launching their careers to new heights.

***Scroll down for full infographic 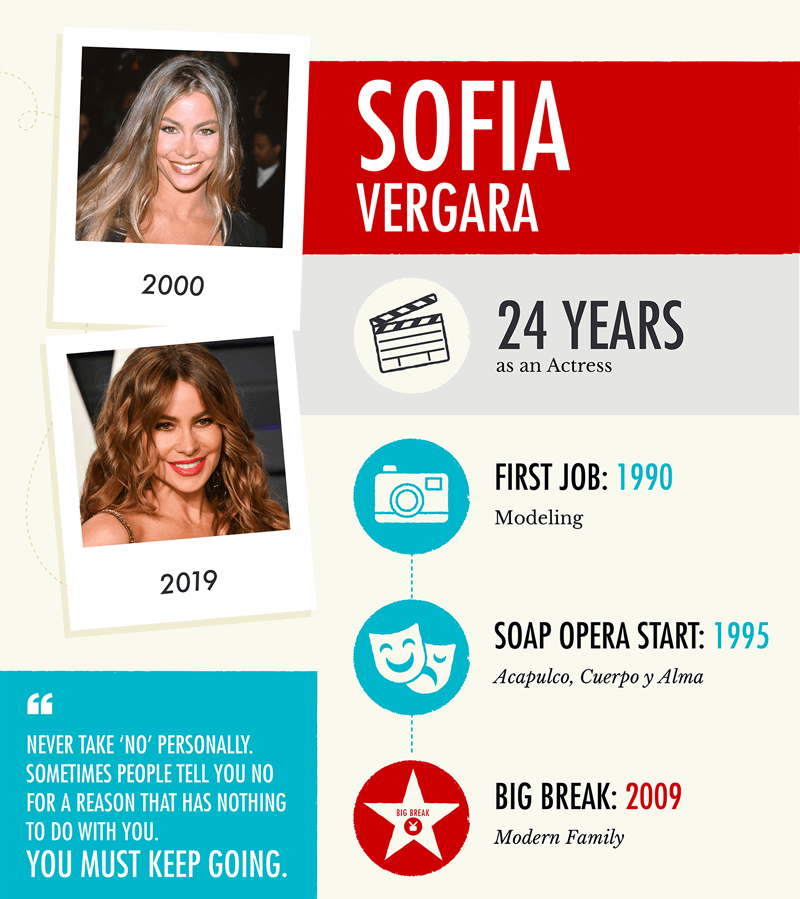 One of the stars of the popular comedy series Modern Family, Sofía Vergara’s level of popularity rose with that of the show. However, the four-time Emmy nominated Colombian bombshell, who is now one of the highest paid television actresses in the world, wasn’t always as well-known as she is today.

Originally discovered by a photographer on a beach in Colombia, Sofía began her career modeling and was quickly offered television work as well. She co-hosted two TV shows on Univision, before earning herself a small role on the telenovela Acapulco, cuerpo y alma. She then earned herself a number of small roles before getting her breakthrough role as Gloria Delgado-Pritchett on Modern Family.

Sofía has partnered with many cancer charities and organizations, most notably St. Jude Children’s Research Hospital. It’s a cause that’s near to her heart, as she was diagnosed with thyroid cancer herself 18 years ago. She was awarded the Courage Award from the Women’s Cancer Research Foundation in 2018 for her continued dedication and support for raising awareness for cancer research. 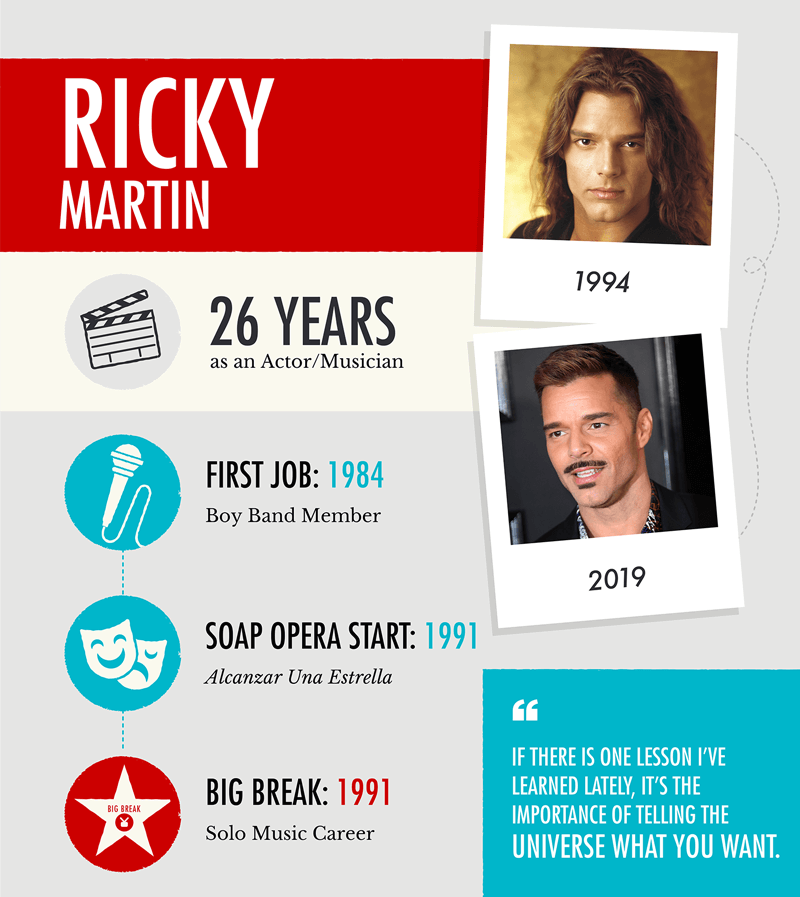 Before he was livin’ la vida loca, global superstar Ricky Martin had a brief acting career in Puerto Rico. Since he was a young boy, Ricky always had a desire to perform, particularly in a musical capacity. However, his career began at the young age of nine when he started acting in television commercials before joining Puerto Rican boy band Menudo from ages 12 to 18.

After leaving the musical group, he moved to Mexico City where he was cast in the play Mama Ama el Rock. While Ricky was performing, he received the attention of a local producer who later cast him in a role on the Mexican telenovela Alcanzar una estrella.

Ricky Martin is most well-known for his musical career throughout the years, but he has not left the acting world behind completely. Most recently, Ricky starred in the Golden Globe and Emmy nominated series, The Assassination of Gianni Versace, earning a nomination for Outstanding Supporting Actor in a Limited Series or TV Movie.

Using his platform for good, Ricky Martin has been a long-time UNICEF Goodwill Ambassador and has also started his own foundation. The Ricky Martin Foundation’s mission is to denounce human trafficking and educate about its existence through research and community initiatives. 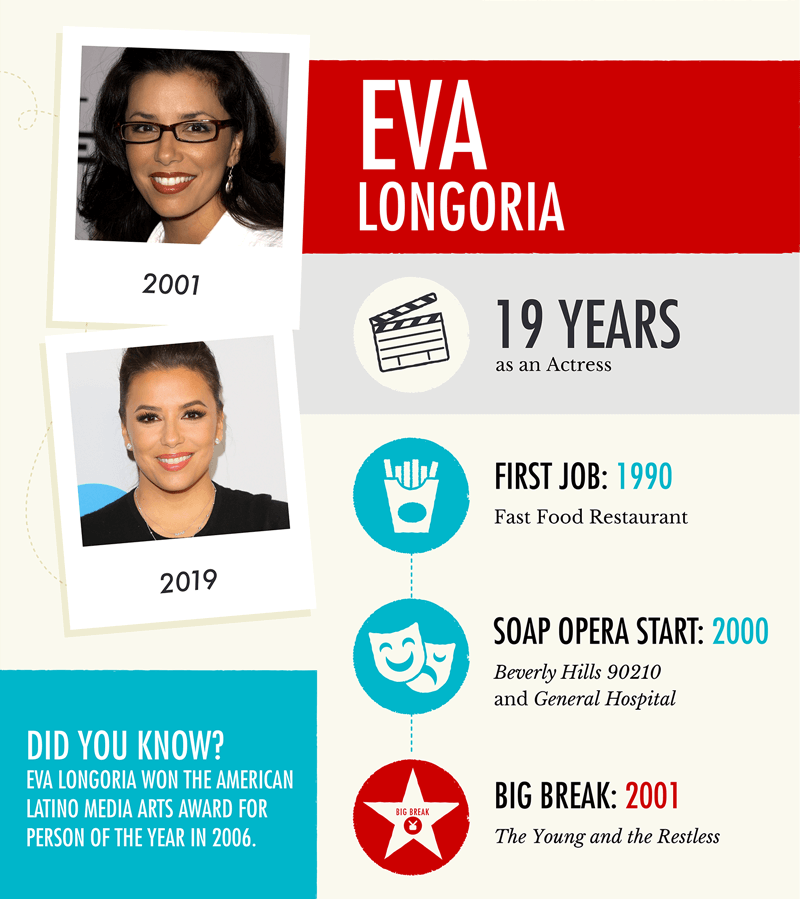 Ever since she was young, Eva Longoria has had a strong work ethic that she has carried throughout her life. Her first gig in the working world was at a fast-food restaurant when she was a teenager, expressing her desire to make her own money. After high school, Eva went on to earn her Bachelor of Science in Kinesiology at Texas A&M University-Kingsville. While in school, she won the title of Miss Corpus Christi USA, which led to her to Los Angeles to compete in a talent competition.

Eva chose to stay in LA after the talent competition to pursue her dream of becoming an actress. To kick-start her acting career, Eva secured two small one-time roles on the well-known soap operas Beverly Hills 90210 and General Hospital. However, she got her big break with her portrayal of Isabella Brana on the popular series The Young and the Restless (YR) which she starred in for two years. Following YR, she scored what is considered her most well-known role on the American drama series Desperate Housewives.

Since becoming a Hollywood star, Eva has used her fame for good and launched two different charitable foundations. One is the Eva Longoria Foundation, whose mission is to help Latinas build better futures for themselves and their families through education and entrepreneurship. Her second charity, Eva’s Heroes, aims to enrich the lives of individuals with intellectual special needs. 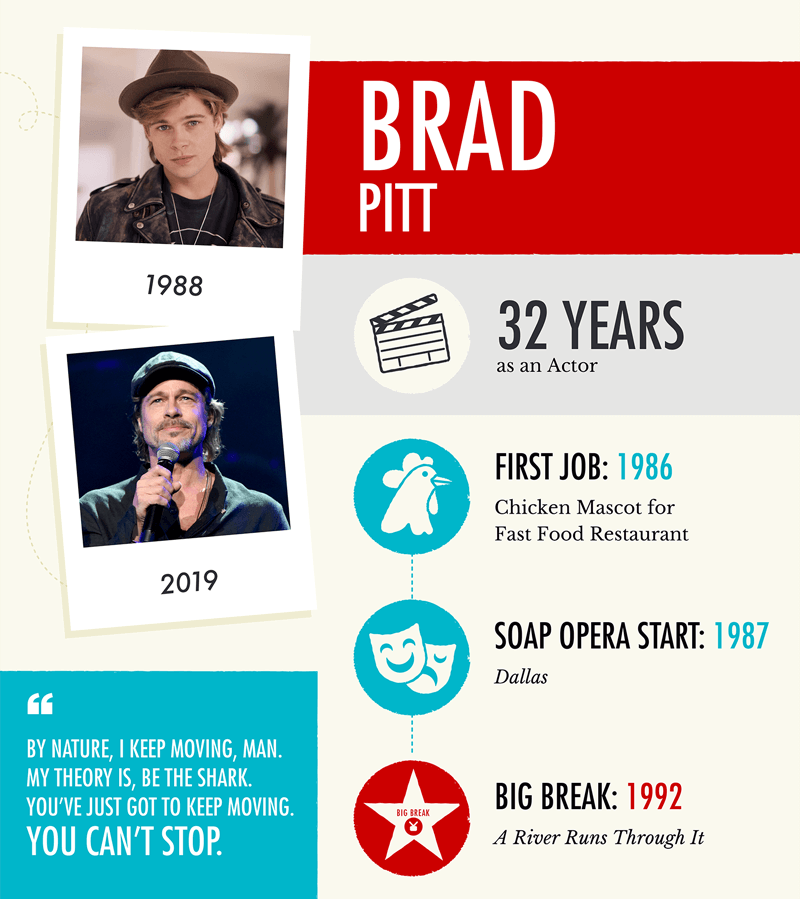 Despite being one of the most well-known names in Hollywood, Brad Pitt didn’t find big screen success right away in his career. He dropped out of college just two credits shy of earning his degree to head to Los Angeles and pursue his dream of becoming an actor. While trying to break into the industry, Brad supported himself by working a variety of jobs, including driving limos, moving refrigerators and kitchen appliances, and dressing as the chicken mascot for a fast-food chain.

While he scored a few one-off jobs on shows, Brad’s first recurring role was on the legendary primetime soap Dallas, which chronicled the exploits of wealthy oil millionaires in Texas. He was on the show from 1978-88 playing the role of Randy. After his time on Dallas, he began to secure more recognizable roles, including in the film Thelma and Louise in 1991. His careers upward trajectory came in 1992 with the movie A River Runs Through It. 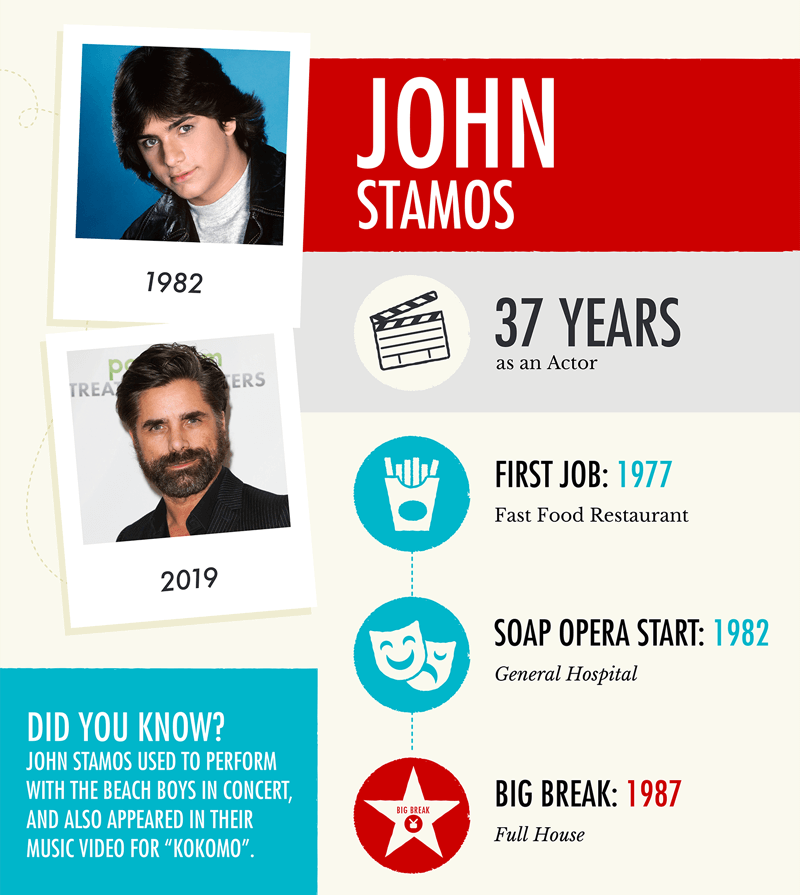 The well-known heartthrob began his working life as a teenager, when he was employed at his family’s fast-food restaurant. However, at the age of 15 John Stamos told his family that he wanted to pursue acting, and it didn’t take long for him to find success.

John got his first professional acting role on the daytime soap opera General Hospital, in which he played the role of Blackie Parrish. He was twice nominated for a Daytime Emmy for the role, and won two Soap Opera Digest Awards for his portrayal of the character.

Despite his success in the world of soap operas, John’s first big break came with his role as Uncle Jesse on the popular American sitcom, Full House. He also pursued a career in the music industry, performing on Broadway and also touring with the Beach Boys as a drummer for some time. 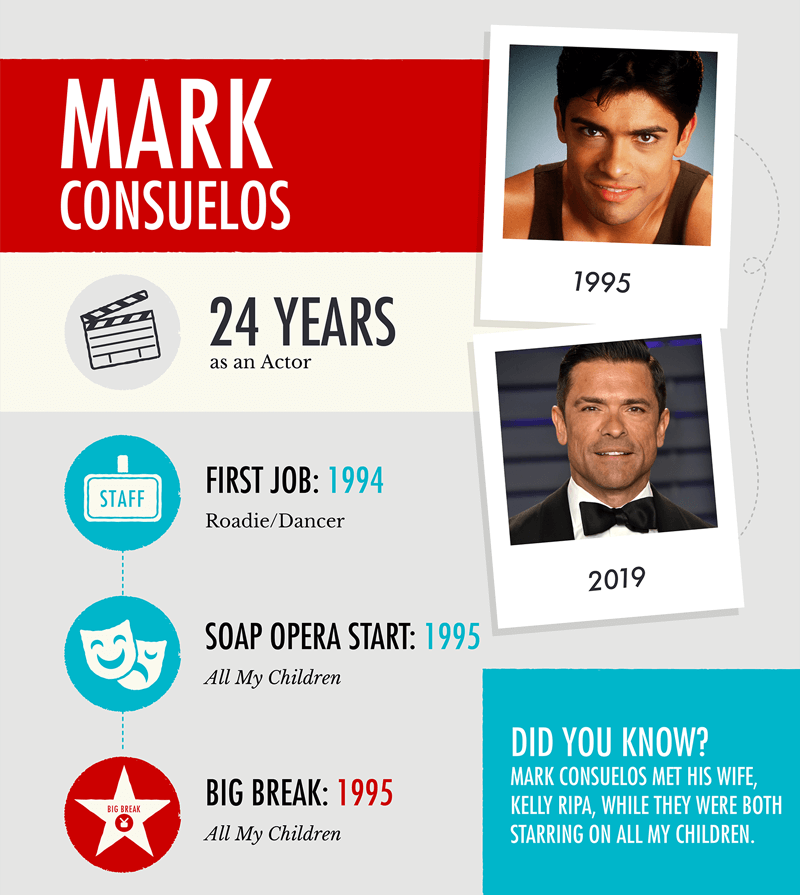 Born in Zaragoza, Spain, Mark Consuelos spent his childhood growing up in Illinois and Florida. After graduating from the University of South Florida in 1994, Mark was looking for ways to break into the entertainment industry. To make money and get exposure to show business, he began as a roadie for a group of male dancers, which eventually turned into him becoming a male stripper for a short period.

Luckily, it did not take long for Mark to land his breakthrough role on the soap opera All My Children, playing Mateo Santos. This role launched Mark’s career, for which he won three Soap Opera Digest Awards as well as an ALMA Award. Despite having a consistent job with the show, he was living on a co-stars couch.

Not only did All My Children launch his long career, but the show introduced him to the woman who would become his wife, Kelly Ripa. The two eloped secretly in 1996 and have been together since. He is now notably starring on the hit drama series Riverdale. 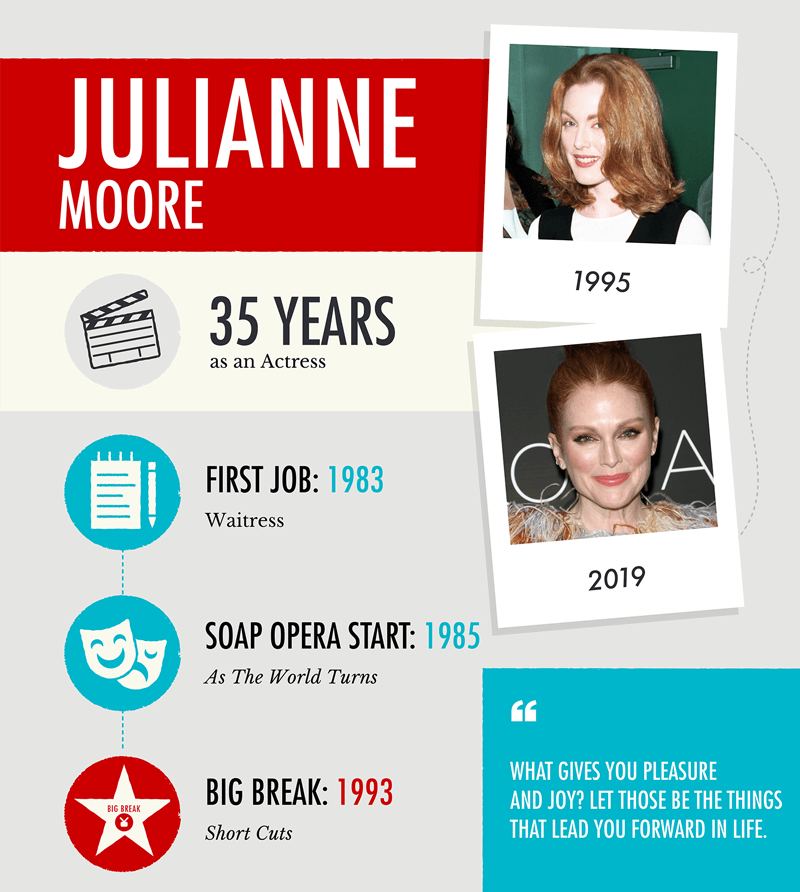 With a father serving in the military, Julianne Moore lived in more than two dozen places with her family before she settled at Boston University for her undergraduate years. She received her Bachelor of Fine Arts degree in acting, and moved to New York City in 1983 to chase her dream of becoming an actress.

She worked as a waitress while waiting to find her opportunity to break into the professional acting world. Julianne performed in several off-Broadway plays before getting her first television role on As The World Turns. In her role as identical twins in the daytime soap, she eventually earned a Daytime Emmy Award, but unfortunately led her to a series of forgettable TV-movie performances.

She finally got her first major breakthrough role in 1993 for the film Short Cuts, which was nominated for both an Academy Award and Golden Globe. After the critically-acclaimed performance from Julianne Moore, her career took off and hasn’t slowed down since. Her award accolades now include an Academy Award, two Golden Globes, two SAG Awards, and both a Primetime and Daytime Emmy.

It’s difficult to imagine a time when these stars weren’t in the spotlight, but everyone has to get their start somewhere. And since soap operas and telenovelas aren’t going away anytime soon, there is sure to be some talented newcomers joining the Hollywood ranks in the near future!