Over 30 years later, Goldie Hawn still has the hots for her longtime love Kurt Russell. The couple stepped out for a date night on Monday in Los Angeles to attend the world premiere of Kurt's new film The Hateful Eight.

Following their night out, the 70-year-old actress tweeted, "I loved the movie #HatefulEight and kurt is still my heartthrob!" 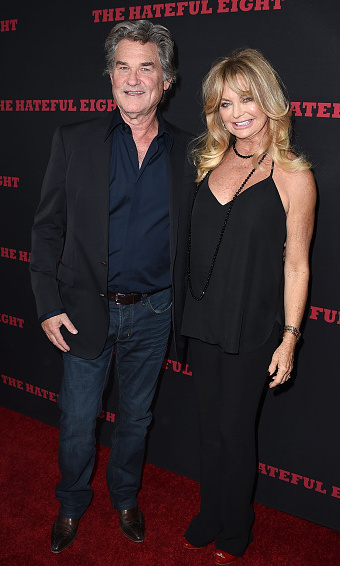 Goldie and her man have been together since 1983, but have never walked down the aisle. The rumor mills recently went amok when Goldie was spotted wearing a ring on that finger. However, The Hateful Eight actor laughed off the recent wedding rumors during an interview with Extra.

"I was just talking to Goldie last night, I said, 'I should really have fun things to say. I have none,'" he said. "They trot that one out every four or five years, now that we're 400 years old ... No, unfortunately, for those that need to hear yes, I do not have good news."

The actress herself has previously spoken out about her own reasons for not tying the knot. In an interview with Porter magazine, Goldie said, "A lasting relationship isn't about marriage." She continued, "It's about compatibility and communication. And you both need to want it to work. If one person does not want it to work, it isn't going to work. Intention is the key."

While there are no wedding plans on the horizon, the couple instead, is preparing for the holidays. The 64-year-old actor told PEOPLE on Monday, "On Christmas Eve, we always have somebody who is there – one of the family members reads The Night Before Christmas." Kurt added, "And sometime soon after that, Santa Claus has a tendency to show up, so the little ones start getting nervous."