Hear ye, Hear ye! Meghan Markle and Prince Harry are now making jokes about their future second baby (emphasis on second). While they were out double dating with Kate Middleton and Prince William at Buckingham Palace, the royal couple dropped a couple of jokes that totally hint at their future family. Scroll for the piping hot tea, please: 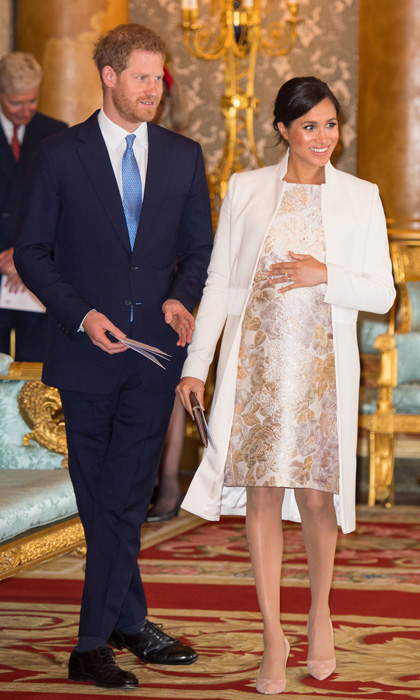 During the 50th anniversary of the investiture of the Prince of Wales, Prince Harry joked about having a second baby

The Duke and Duchess of Sussex were out celebrating the 50th anniversary of the investiture of the Prince of Wales, and as expected in any royal affair, there was lots of small talk taking place. Lucky for us, one royal VIP spilled the tea on some convos Meghan and Prince Harry had during the daytime reception.

Falklands veteran Simon Weston reportedly spoke to Prince Harry about rugby, and that conversation eventually led to baby talk. "We joked about Wales defeating England in the Six Nations rugby," he said, according to Dailymail. "I also warned him and the duchess it serves him right as they will be getting plenty of sleepless nights when the baby is born." In other words, our boy Simon was taking pleasure in the fact that the Wales rugby team beat Prince Harry's hometown team, and because of that (and baby Sussex) the royal couple won't be getting much sleep. Ouch.

MORE: Is Meghan Markle having a baby boy?

Prince Harry then responded with a super sweet (and telling?) response. "He said if they have any more than two [babies] it will serve him right," Simon added. Say it with me, what?! Sure, the expecting father was just taking part in friendly banter, but it probably means that he has baby number two on his mind.

While Prince Harry was making jokes, Meghan was also chatting it up with Welsh secretary Alun Cairns, who was heard congratulating the expecting royal. "I look different than when you saw me last!" Meghan told him. "How are you doing?” Alun replied. “I’m sure everyone is asking.” Meghan then revealed what we all know about her due date: “No, it’s actually very sweet,” she said. “It’s a very sweet, nurturing thing to ask. We’re nearly there!”

That's right, their expected due date is coming up soon in April! To watch the royal couple in small talk action, watch the video above. Farewell!