It’s been one engagement after the next for Meghan Markle, who visited animal rescue charity The Mayhew in her role as patron on Wednesday. During her visit, Prince Harry’s wife met with staff and volunteers whose work is dedicated specifically to improving the lives of animals and people both in London and internationally. The pregnant royal looked stunning in a form-fitting turtleneck dress, but that wasn't the only element of her appearance that generated comment during her visit. 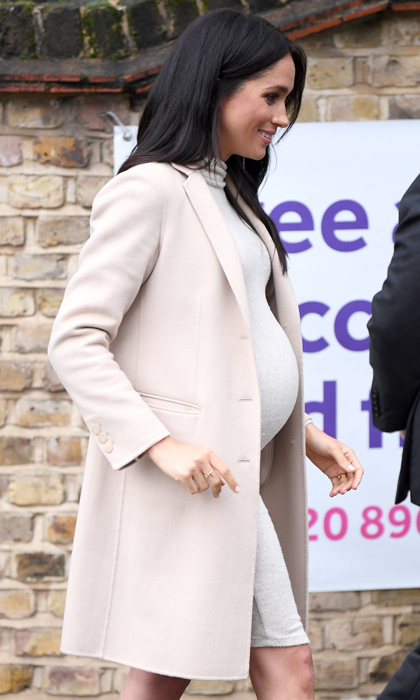 While introducing herself to a group, one of the guests present referred to the mom-to-be as “a fat lady.” From what we hear in the video’s footage, it sounds like the woman's comments are all light-hearted and not meant to offend. “A lovely lady you are," she said. "May the lord bless you...and you’re a fat lady!” Meghan showed off the kind of grace that has earned her legions of fans and admirers. The Duchess, without missing a beat, smiled and replied, “I’ll take that,” while laughs immediatly burst in the background.

The royal braved the rain and looked amazing while doing so in a curve-hugging turtleneck dress from H&M’s maternity line, "Mama," underneath a gorgeous Emporio Armani creme cashmere coat, which she recycled from her visit to Sussex last October. Meghan appeared more radiant than ever, and her baby bump was complemented nicely by her chic ensemble. She completed the monochrome outfit with a pair of nude pumps and a matching bag by Stella McCartney. Beauty-wise, the 37-year-old turned away from her go-to sleek bun and took a different approach with tousled waves. Meanwhile her makeup remained glam as always. 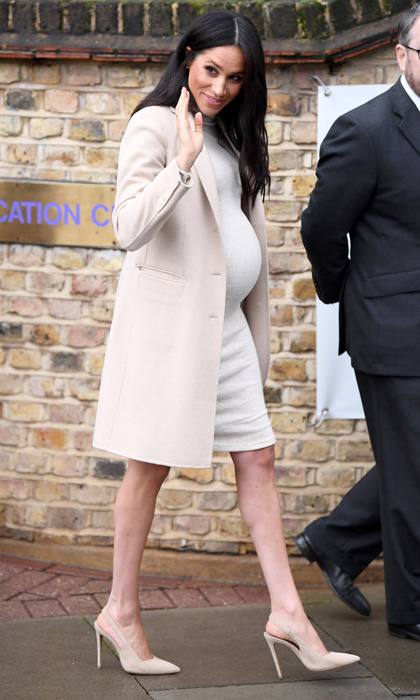 MORE: Meghan Markle makes first patronage visit and her shoes will floor you

Just a day before, the former Suits star and Prince Harry arrived at Birkenhead for their first joint royal engagement of the year. The soon-to-be parents were presented with plenty of gifts – including an adorable pair of booties knitted by one of the ladies in a craft workshop. The lovely couple received plenty of affection and well wishes during their visit to the Tomorrow’s Women Wirral – an organization that supports women in vulnerable situations.