The PDA between power couple Jennifer Lopez and Alex Rodriguez is the perfect combination of sweet and steamy. The newly engaged couple can’t stop, won’t stop showing off their love, and why should they? They’re only the ultimate celebrity power couple! All things considered, however, it is time to acknowledge JLo’s versatility and sheer willpower to rock a certain pair of statement heels. The future Mrs. A-Rod wore a pair of stunners that immediately got the attention of netizens and one famous actress -Halle Berry- who hilariously commented, “Girl, who let you out there with those shoes?” 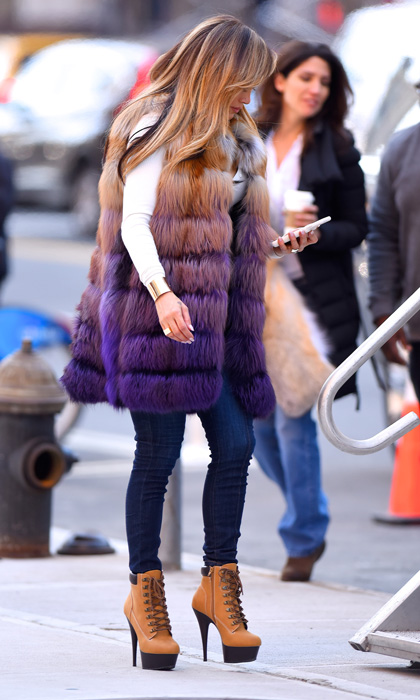 JLo is no stranger to rocking mega-high heels

On Tuesday, the 49-year-old star took to Instagram to share a sweet snap of herself and the former Yankee kissing on the baseball field of the Philadelphia Phillies stadium. JLo, who’s being embraced by her boo, wears a long grey coat, skinny jeans, a burgundy hat and those two-tone red sky-high heels that have everyone talking. Her sexy stunners feature a tall platform, sleek skinny heel and bold buckle accents.

MORE: Fabulous celebrity footwear that will fit your budget

Just like Halle, many of her followers were quick to comment with things like, “Those heels 🔥🔥🔥🔥🔥❤️❤️🙌🙌😍😍,” and “@jlo how are your heels not sinking in the grass? Queen knows how to strut them 👠!” Of course, there’s the occasional commentator who says something like, “Her feet must be hurting.”

MORE: Extra, Extra: Jennifer Lopez and more who have rocked the newspaper-print trend

But JLo is no stranger to rocking ultra-high heels. Just one day before, the mom-of-two wore a pair of what looked like five-inch tall camel-colored lace-up boots while on the set of her upcoming film, Hustlers. Based on her character’s wardrobe thus far, we expect to see more sky-high heels in rotation. 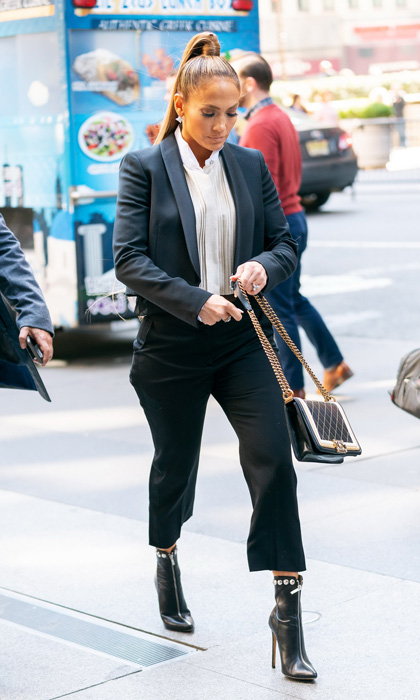 The future Mrs. A-Rod loves to wear stilettos on and offset

However, the Second Act star wears her heels (and she wears them well) on and off set. On Wednesday, April 3, Jennifer stopped by the SiriusXM studios to speak about her new single Medicine and true to form, Miss JLo wore a pair of black pointed STILETTO boots. Very apropos!