A Meghan Markle royal engagement is always a fashion one to watch, and on Friday we loved seeing the pregnant Duchess of Sussex showing off her bump – and her legs! – in a black and white minidress as she joined fellow female power players in London for an International Women's Day panel hosted by The Queen’s Commonwealth Trust at King’s College London.

Meghan wore a 1960s-inspired printed-swirl design 'Azzura' shift minidress by Reiss, with a high neckline and pleated detail on the long-sleeve cuffs. The cool graphic print dress, available on the brand's website, is priced at $345. The future mom, who will welcome her first child with Prince Harry in April, wore her hair upswept in a bun, simple diamond earrings and despite the London chill (and royal wardrobe tradition), appeared to not be wearing stockings for her leggy look. 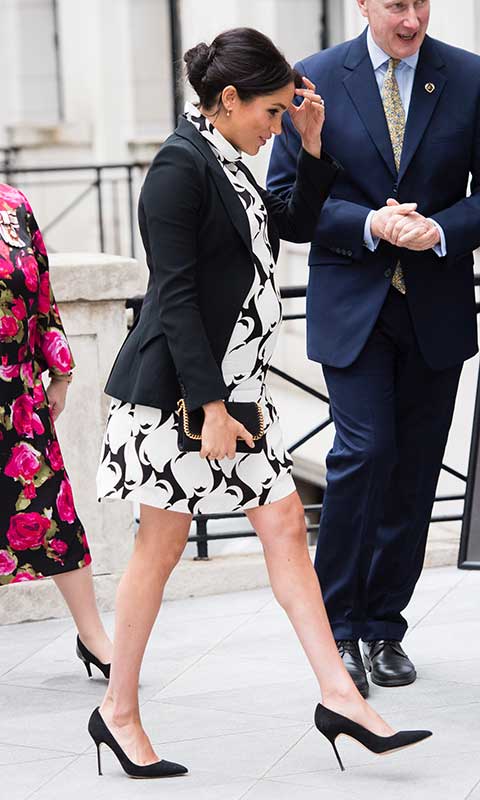 Meghan was joined on stage for the event, which was attended by up and coming students and leaders fellow female movers and shakers including: Annie Lennox OBE, supermodel and humanitarian Adwoa Aboah, and Former Prime Minister of Australia Julia Gillard. The panel's host, Senior Editor of The Economist Anne McElvoy, described the Duchess as "a royal not afraid to embrace full-on feminism". 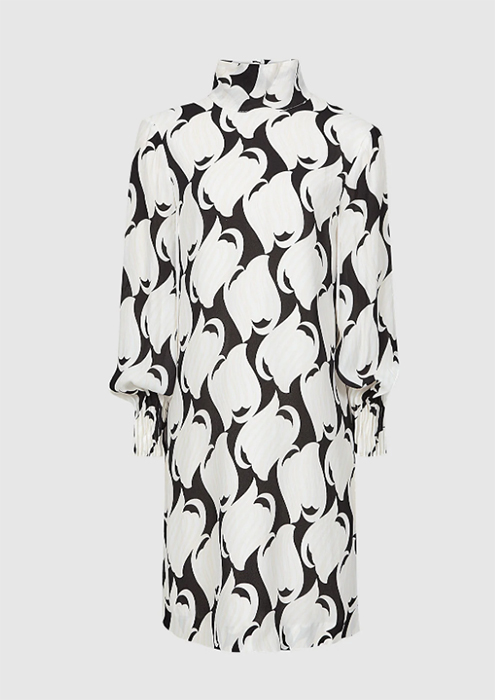 The Queen’s Commonwealth Trust, of which Queen Elizabeth II is Patron, supports young leaders around the world andis presided over by Prince Harry, as President, and its new Vice President, the Duchess of Sussex. On Friday, the Duchess' involvment in the Trust was revealed for the first time.

Despite being in the last weeks of her pregnancy, Meghan hasn't slowed down her schedule of royal engagements. Earlier this week she made a suprise appearance on stage with husband Prince Harry at London's Wembley Stadium for an event for WE Day UK, which helps young people get involved in positive social change.