Mom-to-be Nicky Hilton, a.k.a. Mrs. Rothschild, is helping pregnant women everywhere set #maternitystylegoals with her latest looks. The 32-year-old heiress was spectacular in Carolina Herrera as she stepped out for The Frick Collection's Young Fellows Ball in New York City.

CLICK HERE FOR A FULL GALLERY OF NICKY'S MATERNITY STYLE 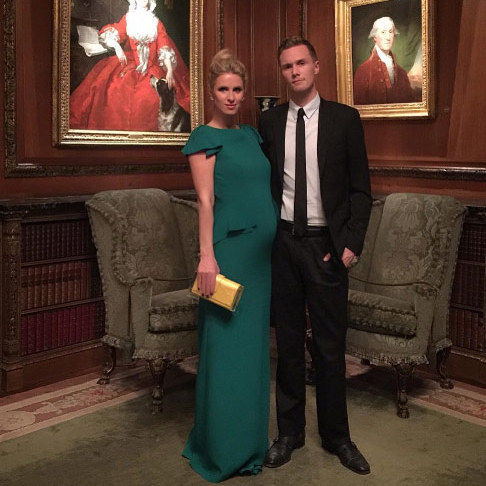 The expectant heiress was joined by brother Conrad Hilton at the fundraiser Photo: Instagram/@nickyhilton

Nicky, who announced her pregnancy in January, accessorized the green gown with a gold clutch and wore her blonde hair swept up into an elegant updo.

The newlywed shared a snap of the night which showed her posing next to brother Conrad Hilton. "Shout to my brother for being the best date tonight," she captioned the shot.

If you're looking for a  or  in the NY area please check out @AnimalHaven shelter! #adoptdontshop (she's available for adoption)

Earlier she'd sported another chic outfit as she hosted a fundraising dinner in Manhattan. The party, which was also attended by actor Jason Biggs, was in aid of Animal Haven, an organization that helps find homes for orphaned animals. Guests were treated to a glamorous dinner and had the opportunity to meet with some of the pets that are up for adoption.

Since Nicky confirmed her pregnancy, she's been showing her sophisticated maternity wardrobe, making a major style statement as she made the rounds at New York Fashion Week.

Her expectant status is part of a fairytale 12 months for Nicky, who wore a Grace Kelly-inspired Valentino gown when she married James Rothschild at Kensington Palace last summer. Before the nuptials, she held a glam bachelorette party attended by sister Paris Hilton and friends in Miami, and following the ceremony she jetted off with her new husband for a safari honeymoon in Botswana.