Anthony Ramos is an actor, singer, songwriter, and most importantly, an authentic soul. He has been in big name projects like A Star Is Born with Lady Gaga and Bradley Cooper, Godzilla: King of the Monsters and in countless Lin-Manuel Miranda works like Hamilton and, most recently, he wrapped In the Heights, where he plays Usnavi de la Vega. Anthony is a rising star, whose star is only going to shine that much brighter after the debut of his album The Good & The Bad.

MORE: Kelly Karloff reveals what it’s like to be Maluma’s leading lady in ‘Qué Pena’

During some down time during rehearsal, the Brooklyn-born artist of Puerto Rican descent cracked a joke around Lin-Manuel, which The Good & The Bad singer felt “was a little hood.” He later states that he needs to change the way he speaks and “talk a little less ghetto.” Lin-Manuel hears this and delivers an incredibly powerful and poignant statement that affected Anthony in a way he didn’t believe to be possible. “You don’t need to change the way you speak, baba, you just need to make sure people understand you,” Anthony recalled Lin-Manuel telling him. 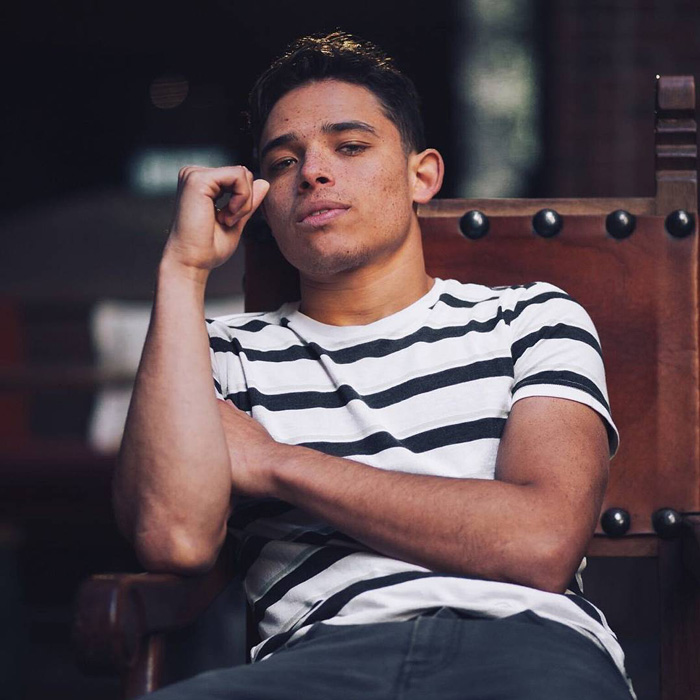 Anthony’s lyrical prowess is visible throughout his entire album

With this album, Anthony makes one thing very clear: he is here to be himself in the fullest way — something that friend and colleague, Lin-Manuel, agrees with. In an exclusive chat with HOLA! USA, Anthony shares how he hopes to ignite the hearts, souls and minds of his fans and everyone who comes in contact with his music. As a songwriter, he possesses the ability to transport you to another world through his musicality while also getting you to ‘feel some type of way’ with his lyrics. Check out the exclusive interview below the video!

HOLA! USA: How has being Latino, and identifying as Latinx, influenced the kind of music you want to make?
"My mom was always playing salsa in the house, and I loved reggaeton growing up. Daddy Yankee, Wisin y Yandel and Zion y Lennox were all really blowing up. On top of that, I was listening to hip hop, too. I grew up in Brooklyn in Bushwick, so Hip Hop and R&B was definitely a huge part of my upbringing. I am grateful that I grew up listening to all types of different music."

Latin music is making a splash in the general market too…
"Yeah, I feel like the worlds are intersecting now, and we’re at a place where there’s people like Bad Bunny at the top of the charts and he ain’t saying a word in English on any of his songs."

Are you going to try and tap that market?
"I’m excited. Right now I’m working on the Spanish translation of the songs on my album, which is awesome. I’m super excited about it. How amazing is it to be able to put out a record in spite of what I look like, in spite of where I come from and telling a story about a kid of Puerto Rican descent from the projects in Brooklyn. These are my influences and you can hear it in my music."

Do you feel this album is paying homage to everything that you have experienced up until this point? In the song The Good & The Bad, you do several references to people that have helped along the way. Do you think this album is your way of saying thank you to them and your way of representing la cultura that much more on a grander scale?
"Absolutely. 100 percent. One of the people I name on my album is Sarah, she’s on The Good & The Bad. We’re going to educational hearings to talk about testing in schools and how the board of education should look at testing in a different way and stop basing kids success on their test scores. And to just try to focus more on what the kids are actually passionate about."

That’s a special project.
"This album is also my thank you to my mom, my fiancée, to my family and to the people who have been such a huge part of my life."

How do you hope that your music will resonate with fans that feel they’re in a really tough spot?
"I wrote music that I wanted to relate to. I said that I want to write songs that I can separate myself from and listen back and be like, 'I totally relate to that,' whether I’m singing them or someone else does a cover. In turn, hopefully other people can relate to these songs and feel the same. There isn’t at least one song on the album that doesn’t give people the courage to embrace something."

What is an example of a song like that?
"I have one called Mind Over Matter that's about making love to somebody you’ve been with for years. We listen to a lot of songs about people meeting people, having one night stands, about the physical aspects. But we don’t listen to a lot of songs about the mental aspect of it, you know. When you’re in a long relationship, it becomes more mental then physical."

How would you describe your album?
"If I had to put it in one word 'healing' because I know that it healed me. This album is still healing me. Every time I do a playback or play the album for people, and I tell the story, it’s like a new part hits me."

Is there one song that holds a special meaning to you?
"I got this one lyric, 'I only feel the ground under my feet when Jazzy is standing right there next to me, those are the things that make me feel at home, that’s the only paradise I know.' I found myself one weekend choked up singing that because my fiancée and I had a really tough week, and it was encouraging to remind myself of that."

You’ve worked with big stars like Lady Gaga and Lin-Manuel. What is the best piece of advice that you’ve gotten from them or anyone in the industry?
"I remember Lin said something to me in rehearsal one time. I cracked a joke, and it was a  little hood and ratchet. I’m like, 'I need to talk less ghetto, I need to change the way I speak.' Lin said to me, 'You don’t need to change the way you speak, baba, you just need to make sure people understand you.' I’ll never forget it. In that moment, all the memories of the times where I tried to change how I look, how I speak, how I act, how I sing to try and be something else and be what I thought was most accepted by people. In that moment, it was like a stamp on my life passport. He stamped that on my heart. Like God used Lin to stamp that on my heart. You don’t ever need to change how you speak; you just need to make sure people understand."