Lorenza Izzo has been a longtime fan of Quentin Tarantino, so to be cast in his ninth film Once Upon a Time ... in Hollywood was a dream come true. Throw Leonardo DiCaprio, Brad Pitt and Margot Robbie into the mix, the 29-year-old had to “pinch [herself] non-stop.” After the first day jitters subsided, Lorenza quickly realized that she was part of the crew. “It's a very special set,” she tells HOLA! USA. “An interesting thing happens when you work with such talented legends—it’s just easy.” 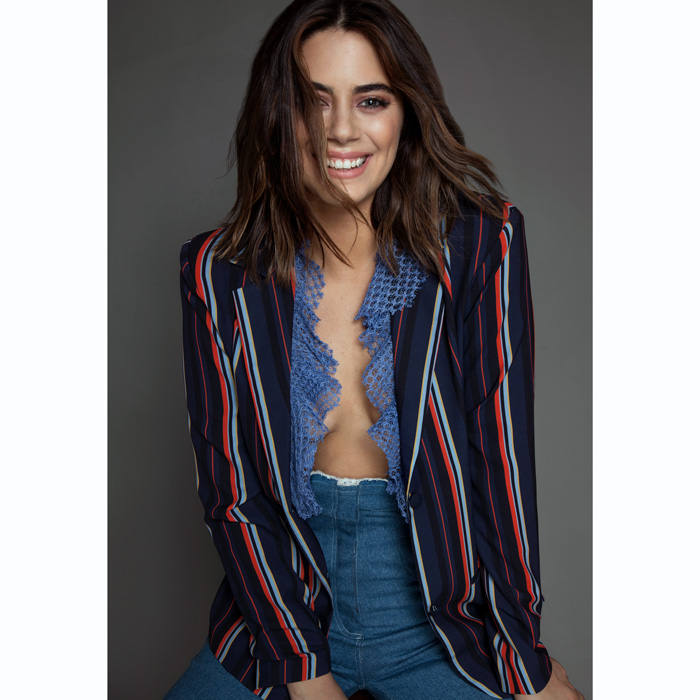 Chilean actress Lorenza Izzo had her dream role in the movie

Though she isn’t able to divulge much about her character as Italian “bombshell” Francesca Capucci (she plays Leo's wife!), Lorenza does admit, “It’s the most amazing role I've ever had to play.” And while Francesca may be fictional, it’s her approach to life that will stay with Lorenza forever. “It was such a transformative role for me and a transformative time in my life,” she explains. “It's been such an incredible journey and very empowering.”

Keep reading for more about the Chilean actress’ experience on set, and see why she is the true definition of bombshell, even if she doesn’t think so!

RELATED: ALL THE STARS AT THE ONCE UPON A TIME IN HOLLYWOOD PREMIERE 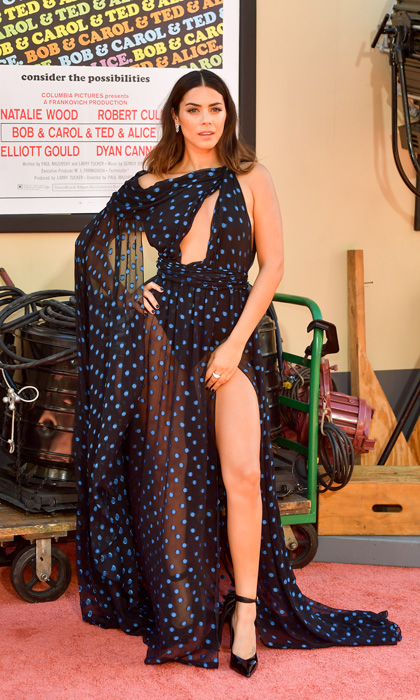 The 'bombshell' at the Los Angeles premiere of Once Upon a Time ... in Hollywood

HOLA! USA: What was it like to be cast in this Tarantino film?
Lorenza Izzo: “I mean, as a Tarantino fan myself, since I was a child, I could not be more excited and obsessed and elated by the fact that he's doing a film like this. Tarantino is a man of mystery. I mean the amount of people that read the script can be counted with two hands.”

Do you think this is his best one yet?
“I would say with absolute security, yes. I think it's been said it’s his Pulp Fiction meets Inglorious Bastards in one. So for me, those are my two favorites of his.”

As you mentioned Quentin makes sure minimal details about the movie gets out, but what was it like working with Leo and Brad?
“They were both incredible. I mean, let's be real, I was born and raised in Chile, in the middle of nowhere, very, very, far away. And it was my dream to come to L.A. It was my dream to work in Hollywood. It was my dream to work with Brad Pitt and Leonardo DiCaprio. Honestly, to show up on set and have a scene with both of them, it was just like, is this real, is this really happening, am I dead? They're so good at what they do. They're so down to earth that they made me feel very much a part of the crew.” 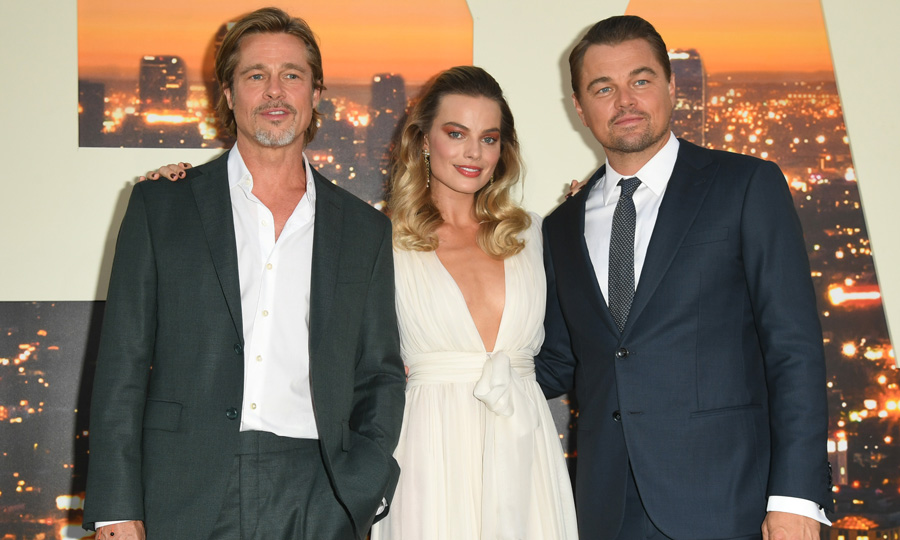 One of Lorenza's favorite movies is Romeo + Juliet, but she didn't tell Leo, the actress shared she "wussed out"

Tell us about your character, Francesca Capucci.
“She is based loosely on all the films that took place in the spaghetti Western times of both America and Italy in the '60s. There's always a bombshell type character who was usually a beautiful, stunning, very powerful woman, and she's usually the love interest of the lead in all these movies. When I say bombshell-esque, throughout the history of filmmaking there's always been that type of character. Sophia Loren and Gloria Cardinale, all of these women were stunning, curvaceous, fully healthy, beautiful women. I think Francesca Cappuci is a mix of a bombshell type character, not that I'm saying that I'm a bombshell, but she embodies that archetype type, yet she's very funny and loud and takes up a room."

What was it like playing her?
“For me, beauty comes from within. What that translated to in my work was actually not prepping physically for the role at all. Literally, letting go of all, because you know, we live in a world that women still are very much subdued by what these standards of beauty are, what they're supposed to look like, what they're supposed to feel like, and how much they're supposed to weigh. It was a bit scary, and honestly, that jump started my whole journey into becoming okay with who I am and letting go of all of these crutches that I used to have. I worked out every day because I had some stunt scenes to do, but I was training for the role in that aspect. It wasn't about the way I should look. It was about the way I should feel.” 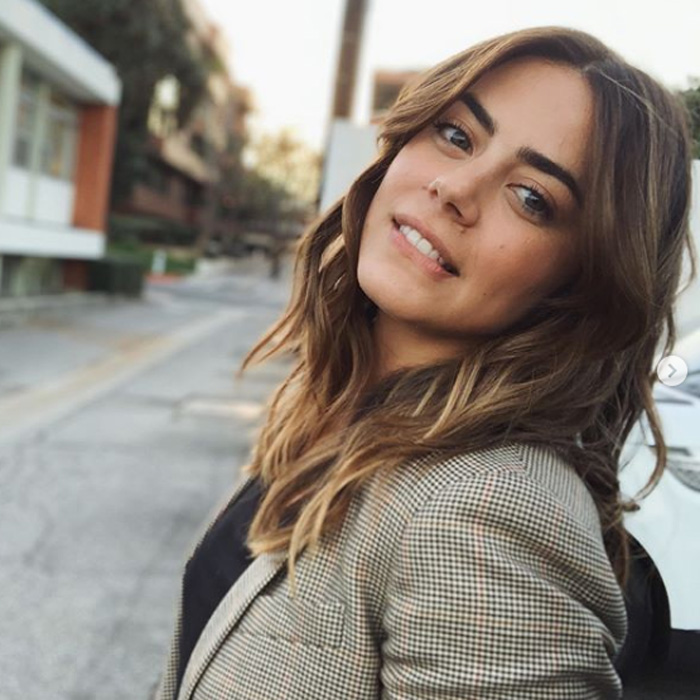 The 29-year-old makes it a point to post in both English and Spanish sharing, "I was born and raised Chilean, but I feel American, and it's very important to me"

How has that been?
“It's been the most incredible awakening in myself. It was such a transformative role for me and a transformative time in my life. And it only happened the year I turned 29 that I realized it. I think the past year has been the year that I have most found my worth in my own self, my love for the sisterhood that it is to be a woman, that it is to be a Latina woman in this time and age.”

Speaking of sisterhood, did you and Margot Robbie become close?
“I love her! I literally just geeked out on her. She was the best. She was so embracing, so graceful, so talented, so happy and... I am so excited to watch her career grow. I have been following her and just to meet someone like that and have her make you feel like a fellow partner, like a fellow female in the same business. It's just so encouraging because I asked her for so much advice, and she was so open.”

Lastly, you just filmed another movie, Women is Losers, that also takes place in the ‘60s? What's your favorite part about that decade?
“I think fashion, music, honestly, the liberty. There was sense of true belonging to understanding what your cultural needs were and how to go about them. You could see the fashion was so colorful; it was so vivid, so out there.”

Once Upon a Time in Hollywood is in theaters July 26.