Congratulations are in order for Eddie Murphy and his longtime girlfriend Paige Butcher. The couple welcomed daughter Izzy Oona Murphy on Tuesday, May 3 in Los Angeles. In a statement released to People magazine, the 55-year-old says "both mother and daughter are doing well."

ALL THE CELEBRITY BABIES SET TO ARRIVE IN 2016

Izzy, who weighed 7 lbs., 15 oz. and measured 19 1/2 inches long, is Eddie's ninth child and Paige's first. Eddie is also the father to Eric, 26, and Christian, 25, from previous relationships. His other children include Bria, 25, Myles, 22, Shayne, 21, Zola, 15, and Bella, 13, from his marriage to ex-wife Nicole Mitchell, as well as nine-year-old Angel whose mother is former Spice Girl and Melanie Brown.

Eddie and Paige, 36, have been dating since meeting on the set of one of his film's in 2012. Over the course of their relationship, the couple have remained private. It was first announced that the duo were expecting their first child together in November of last year. Eddie confirmed the news when asked by a photographer while grabbing coffee with his lady love. "It's a girl," he shared. 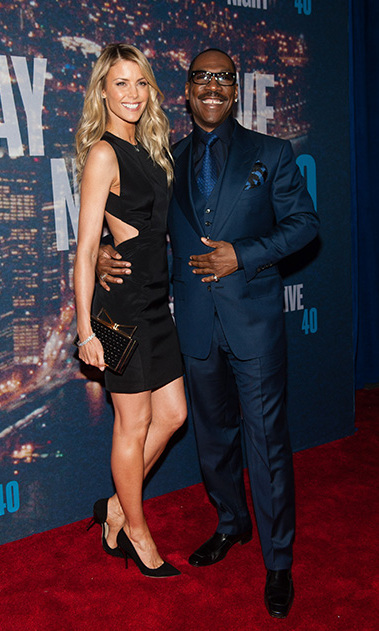 Eddie and Paige have been a couple since 2012 Photo: Getty Images

As for the other ladies in his life, his oldest daughter, Bria is following in her comedic father's footsteps. In an interview with Entertainment Tonight, the young actress was shown a vintage clip of her father and couldn't believe how much her brothers favor him. "He looks like my brothers," she said. "They even move exactly like him. It's scary to look at how much you're like your parents when you get older."

Eddie also has been making his comeback professionally. The Nutty Professor actor made his return to the stand-up stage after a 30 year absence when he received an award at the Mark Twain Prize for American Humor.