Marrying George Clooney certainly has its perks — and that includes hanging with his closest friends. As her and George's relationship evolved, Amal Clooney has become extremely close with BFF Rande Gerber's wife Cindy Crawford.

In a new interview, Rande revealed that his wife has found a new friend in barrister Amal since the couple started dating. "They are very compatible," he told the Evening Standard's Deluxe magazine. "Both strong, intelligent, committed women." Rande revealed that his wife of 17 years has become very close to Amal Photo: Getty Images

The two couples are so close that they both have holiday homes on the same estate in Mexico. "Originally we were going to build just one big house for us," Rande explained. "But George was single at the time and we have the family, and Cindy said 'Hmm. I don't think that's such a good idea. Let's build two houses.' It’s all still on one property, so it's like breakfast at George's place, lunch at mine. It feels like one big party." Cindy and Rande at George and Amal's wedding in Venice Photo: Getty Images

While Rande, who owns tequila company Casamigos with George, has 15-year-old son Presley and 13-year-old daughter Kaia with Cindy, the businessman says he's not sure if his actor friend will become a dad. Although George would make a "great dad" according to Rande, the former model added: "I don't know if he's going to be or not."

There was certainly no denying that George and Amal's Venice wedding celebrations were one long fun-filled affair. "It was a big party for three days straight," he said of the couple's nuptials. "We flew 100 cases of tequila in and we drank all of it." 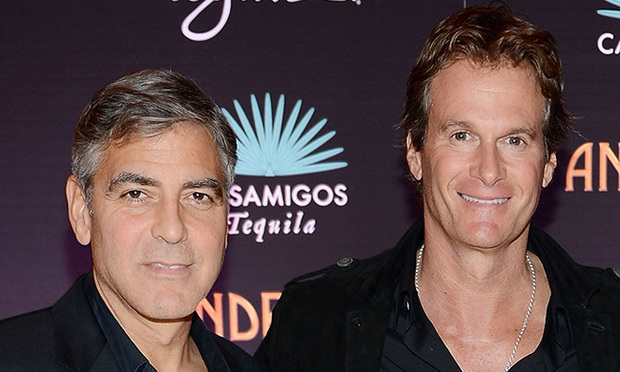 George and Rande own a Tequila company together Photo: Getty Images

Being Mrs. Clooney, Amal has taken it all in stride. "George and Amal knew what they were getting into," he added. "Such a big event in George’s life is always going to get a lot of attention. You try to not let it affect your life as much as you can control it."

The buzz surrounding their relationship didn't stop as soon as they left the canal-filled city. Rande has no doubt they will continue to handle the attention, "but they are dealing with it brilliantly. Obviously George is used to it, so he knows how it rolls. We are stealth. We have some good moves."