Royal ladies seem to be thinking pink these days. Less than a week after Kate Middleton made a colorful splash at her nephew Archie’s christening in a rosy shade, Queen Letizia followed suit wearing a hot pink number to her namesake awards on Tuesday, July 9. The Spanish royal presented the Reina Letizia 2018 Awards at the Corral de Comedias Theatre in Almagro, Spain. The awards, organized by the Royal Board on Disability, celebrate artistic creation that promote the rights of people with disabilities, social inclusion, equal opportunities and the rehabilitation and prevention of disabilities. 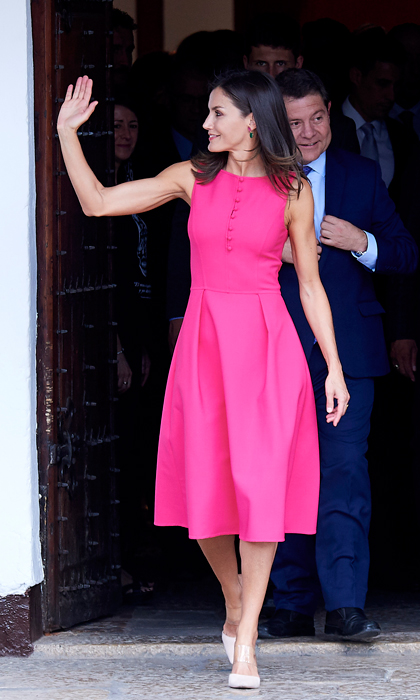 The mom-of-two, 46, looked pretty in pink for the occasion wearing a bespoke frock by one of her go-to designers Carolina Herrera. The sleeveless fit and flare design highlighted Letizia’s toned arms. King Felipe’s wife completed her vibrant ensemble with her gold, ruby and chrysoprase Tous earrings, Steve Madden light pink pumps, and a matching clutch.

While meeting well-wishers in Almagro, the Queen was presented with picture frames that featured an old photo of herself strolling hand-in-hand with her husband and their two young daughters, Princess Leonor and Infanta Sofía. The royal, clearly taken by the sweet gesture, was all smiles as she clutched the sentimental gift.

MORE: Queen Letizia's daughters are heading to the US this summer 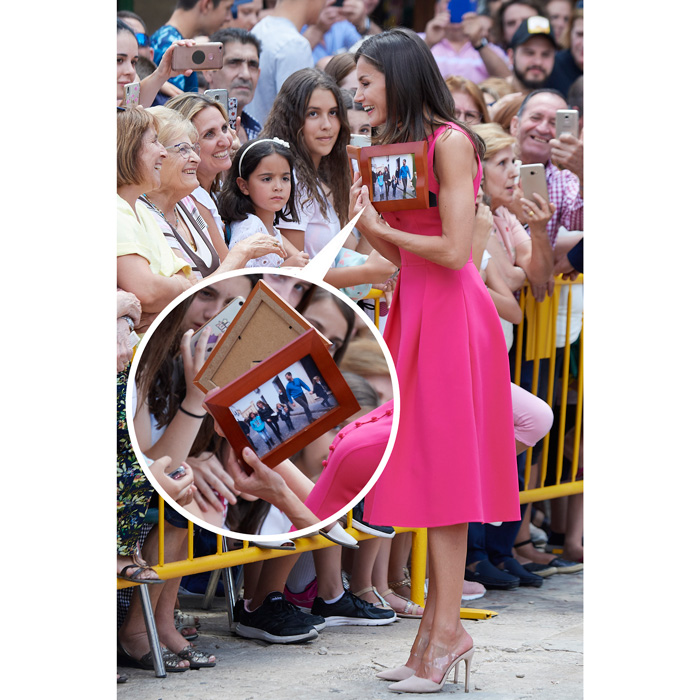 During the awards ceremony, José Manuel Gómez, a member of the Grupo Orozú Teatro, which is made up of blind and visually impaired actors and actresses, recited a poem by Sor Juana Ines de la Cruz. Earlier in the day, the Spanish Queen presided over the meeting of the Council of the Royal Board on Disability. The board is an autonomous body of the General State Administration that aims to promote the application of human rights, humanistic ideals, scientific knowledge and developments. 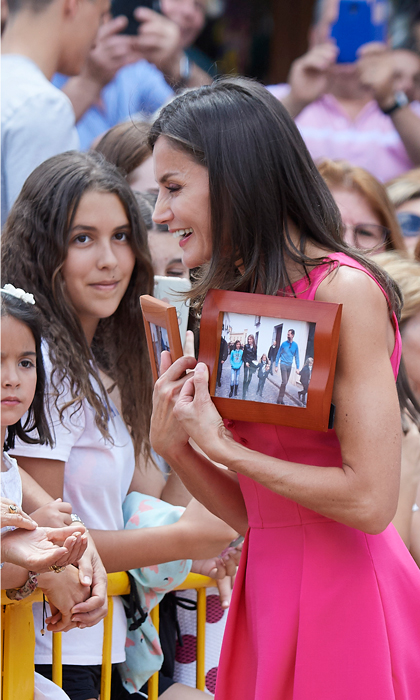 VIEW GALLERY Letizia was all smiles holding her gifts

Letizia is the honorary president of the organization. Back in 2015, the royal delivered a powerful speech at the Telefónica Ability Awards saying, “Disability is not a problem. It is a reality that requires a joint effort of all. It is a reality that puts up a mirror. Placing people with disabilities in the production chain is the best expression of who we are as a society, as a country.”