NYC with a lot of love! Meghan Markle stepped out in New York City on Tuesday, February 19. The Duchess of Sussex was all smiles as she left the Mark Hotel in the afternoon – surrounded by security. It hasn’t been confirmed if the royal was going to or coming from her baby shower. Meghan walked with her hand over bump, as she was lead by her team into a vehicle – parked outside of the luxury hotel. 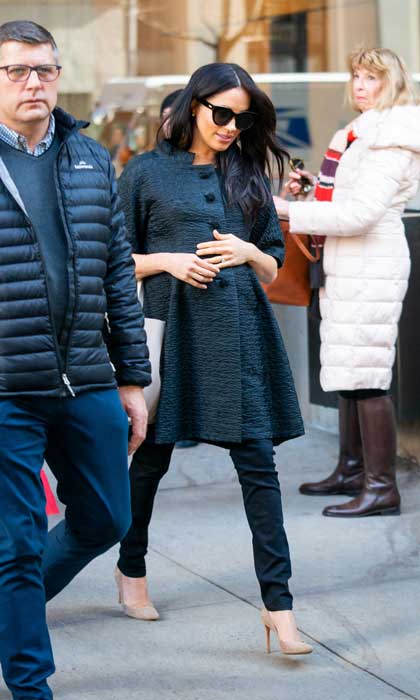 The 37-year-old was chic and true to New York City form in an all-black ensemble. Meghan wore a set of trousers by Hatch the maternity brand. The Duchess wore a pattered peacoat and carried the Matryoshka Locked L bag by Carolina Herrera. The Duchess, who wore her long brown tresses down for the occasion, completed her look with a pair of dark shades. Details surrounding Meghan’s shower have been kept private.

It was reported that the affair would be small and intimate – with only 15 guests. The list was not released to the public; however, it’s safe to say that Meghan’s best girls Jessica Mulroney and Abigail Spencer may be in attendance. Earlier in the day, hundreds of flowers were seen being delivered to the Upper East Side venue. One of the first gifts to arrive was a coverable crib by babyletto. The crib includes a toddler bed conversion kit and comes in a variety of colors. 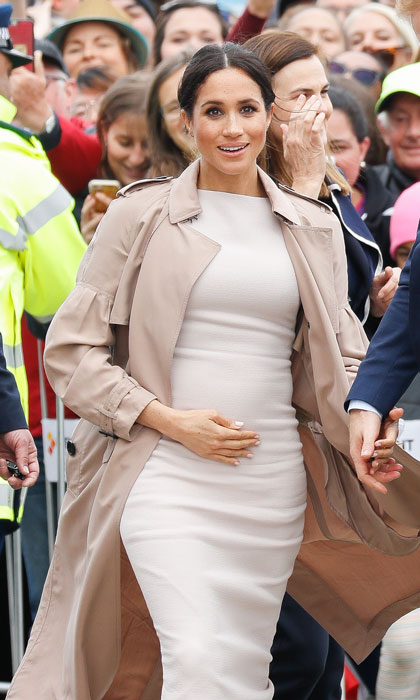 The Duchess took a secret five day visit to the Big Apple for friends and family time Photo: Getty Images

Prince Harry’s wife made the top-secret trip to the Big Apple on Friday, February 15, just one day after her husband attended a solo engagement in Norway. Over the weekend, the Duchess was spotted enjoying lunch with friends at SoHo hotspot Ladurée. The trip to NYC, which will be the Duchess’ final until after the arrival of her baby, comes before she and Harry travel to Africa for a three-day tour of Morocco. The Sussex’s are set to welcome their first child in “April or May.”