In case you haven't heard, Kylie Jenner turned 22 and celebrated her birthday in extra lavish style aboard a $250 million yacht that was chartered around Europe. The makeup mogul has been documenting the festivities on her social media, but one thing fans were anxious to see was whether or not Kylie and her boyfriend Travis Scott were going to tie the knot since the two were spotted boarding their plane with a big white dress that seemed a lot like a wedding dress. Turns out the $23K Oscar de la Renta white gown was just a birthday dress. Leave it to Kylie to dress like a bride for her birthday.

Kylie Jenner revealed her "wedding dress" during her birthday celebrations

The 22-year-old star took to her social media to flaunt her gorgeous gown. In one clip, Kylie gives us a glimpse of the top part of the dress as her hair stylist puts the finishing touches on her top bun. In another, she's standing in the yacht's elevator as she takes a selfie video. But fans really get a glimpse of the Oscar de la Renta design in the clip where she's running across the hallway.

MORE: Kylie Jenner was gifted a $21K statue for her birthday - see the pictures!

The white, one shoulder gown is from the Fall 2019 collection and features feathers all around as well as a chic feathered train that trails behind. It's currently sold out, but retailed for $23,000.This dress is popular among A-listers—Lupita Nyong'o wore it earlier this year for the Vanity Fair Oscar Party. During Kylie's birthday celebration, she also filmed herself and her one-year-old daughter Stormi singing happy birthday in a cute mother-daughter video, where the little girl adorably sings "happy birthday dear mommy." 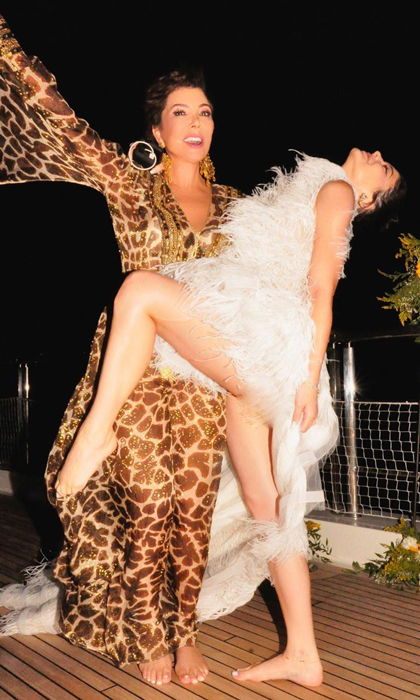 Momager Kris Jenner also took to social media to wish her daughter a happy birthday. "I can’t believe you are 22...It is the greatest joy and blessing to be your mommy and watch you grow into such a beautiful woman inside and out," she wrote alongside a photo of the two aboard the birthday yacht. "You are the most amazing daughter, sister, friend and mommy.... watching you with Stormi has been such a wonderful blessing. I am so proud of you... You are truly an old soul and such an inspiration to everyone. your creativity, generosity and huge heart is truly remarkable! You are an angel girl and I love you more than you will ever know."