Queen Letizia is no stranger to wearing bold reds. In fact, on the contrary, the Spanish monarch is more often than not spotted wearing an iteration of the fiery hue. So for her latest public engagement in Madrid, it’s no surprise King Felipe’s wife opted for a scarlet ensemble worthy of countless double taps. On June 12, Letizia stepped out to a media event looking modern-chic in a long-sleeve top tucked inside matching cropped trousers by BOSS. The stylish Queen perfected monochrome by adding a belt in the exact color and coordinating candy-apple heels. 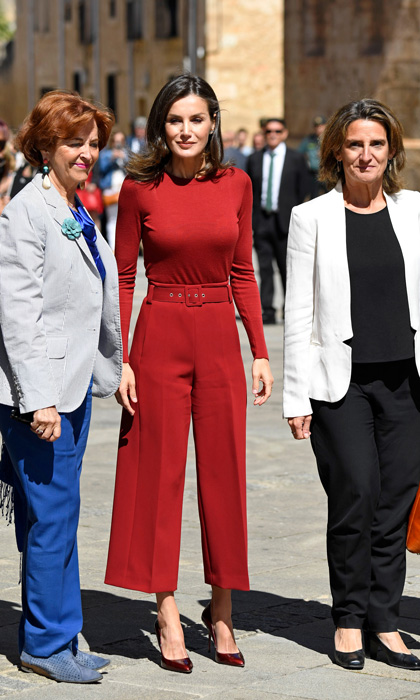 With such impeccable style, Letizia can’t go wrong with her sartorial choices. The former journalist’s tailored look showed off her slim and ultra-fit figure while showcasing her elegant style. On the beauty front, Letizia went au naturel with light, bronze-y makeup and she wore her glossy locks down allowing her layers to do their thing.

Just a day before, the 46-year-old took a less-bold approach with moody blooms in a fitted long-sleeve midi dress by Massimo Dutti. She teamed the silk number with a slim belt and sleek Carolina Herrera heels – a pair she’s worn a few times before. 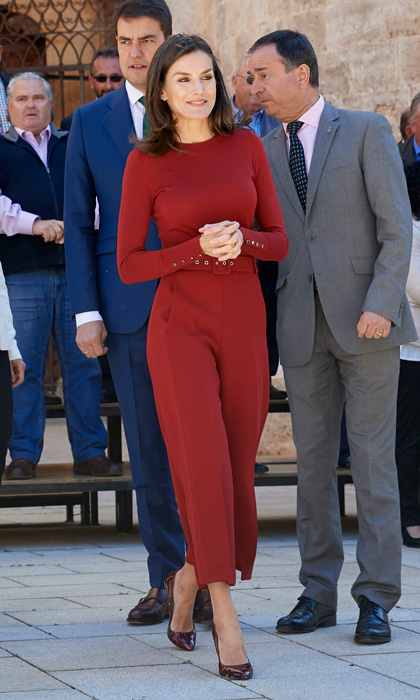 But even though she likes to switch it up, the Oviedo native always returns to her tried and true color, which we must add is quite flattering on her. For the Day of the Armed Forces festivities in Sevilla, Spain, the stylish royal manifested her love for red with a fabulous wrap dress by Sevillan brand, Cherubina, paired with same-colored heels by Margrit and a suede clutch bag designed by Varela.

MORE: What do Milly Bobby Brown of 'Stranger Things' and Queen Letizia of Spain have in common?

Besides looking radiant in the red-hot hue, the color is a patriotic nod to her home country as red is a national color of Spain and appears on the nation’s flag.