Queen Letizia of Spain kicked off June with a fiery blaze. The modish monarch was red from head to toe as she stepped out for the Spanish Armed Forces' Day festivities in Seville, Spain on Saturday, June 1. Sparkling alongside her husband King Felipe, the 46-year-old beauty reigned supremely in a lovely cherry wrap dress with coordinating earrings and pumps, and a matching clutch, of course. Her stunning style not only turned heads, but also subtly honored her country in multiple ways. 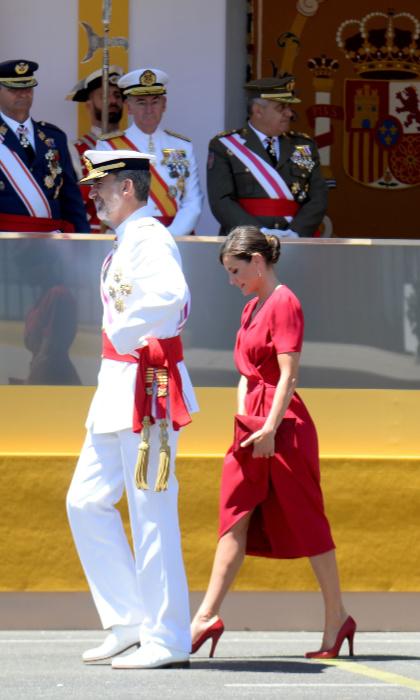 First and foremost, red is a national color of Spain and appears on the nation’s flag. This makes it an obvious hue to don in honor of those that have served the country, and is the same shade seen on Felipe's sash. Second, her new dress supported a local business as it was designed by Cherubina of Seville.

MORE: Queen Letizia and Meghan Markle twin in THIS denim look of this season!

We love the long asymmetrical silhouette created by the dress, which aptly flaunts the mom-of-two’s fit figure. Her waist was tightly cinched by a belt fabric that featured a button detailing. The discreet ruffling on the chest and midi skirt is also a trait to be admired. The dress is defined by the designer as the “Suzie model” or “the final guest dress,” and also comes in the color blue. 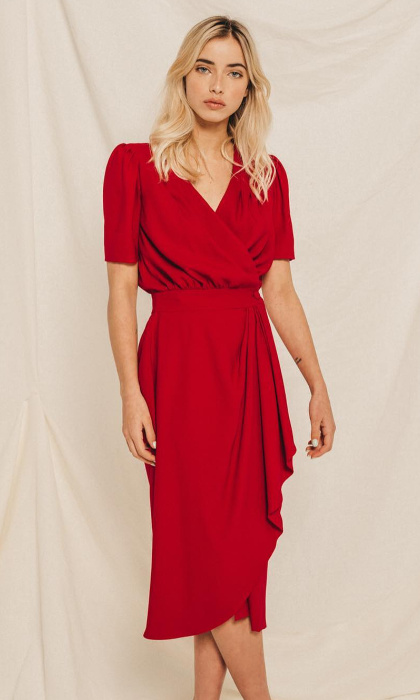 The Queen continued her patriotic streak with her accessories. Her matching bag is by Varela and her shoes are by Magrit, both designers originating in Madrid, Spain. As for her earrings, the retro style seems to be made of white gold, brilliant-cut diamonds and, to seal the deal, red rubies.

Letizia and her 51-year-old husband presided over Armed Forces Day 2019 activities, which included: a Battalion of the Royal Guard and then kicking off and watching the annual parade - which was on both the street and in the sky with aircrafts - from their royal gallery. Later, the power pair offered a reception to a military commission of the three Armies and the Civil Guard.