New York Fashion Week hasn't officially started, but that didn’t stop Jennifer Lopez from putting on a private fashion show for her fiancé, Alex Rodriguez. The Hustlers actress, 50, modeled a variety of looks for the former Yankees player during their end of summer getaway. The ever-dutiful A-Rod documented the show on social media for his followers, calling it the “Saint Tropez Fashion Show.”

The first look the mom of two modeled was a body-hugging dress that featured a plunging necklace, while the second, was a more conservative, chic checkered design. The third outfit Jennifer considered was a pleated midi skirt and knit crop top; and last, but certainly not least, a white, ruffled lace frock with a statement brown belt at the waist. Ultimately, it looks like none of the looks made the cut for their night out. Instead, Jennifer opted for a beige Sabo playsuit with puff sleeves, which she teamed with an oversized hat.

GALLERY: A LOOK BACK AT ALL OF JENNIFER'S BRIDE-INSPIRED GOWNS

The engaged pair has been enjoying time together in the French Riviera on board a yacht. The couple attended Magic Johnson’s 60th birthday at Nikki Beach earlier this week. Last month, Jennifer spoke with Extra about her wedding to the retired baseball player, admitting, "We haven’t really planned it yet." But don’t fear as talks of the wedding are still very much happening. The Second Act star said, "We are talking about it... we are talking about it." 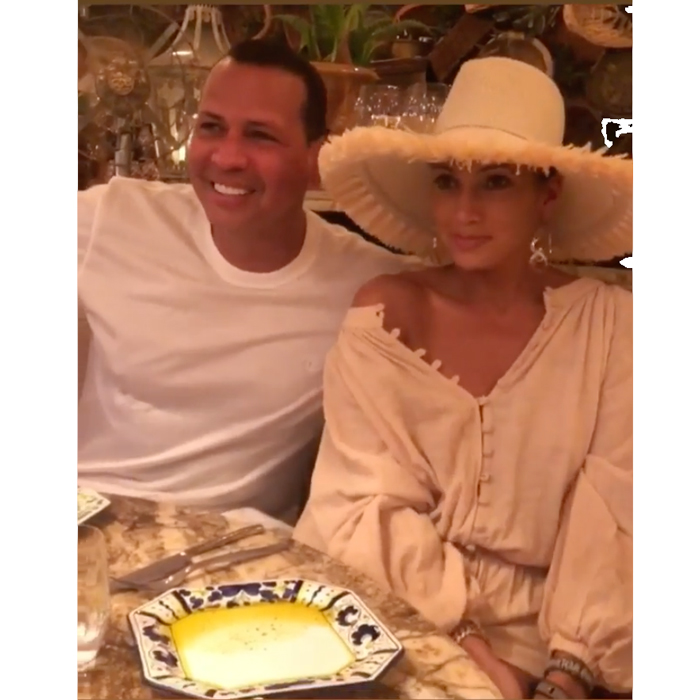 Alex and Jennifer are vacationing in Saint-Tropez

The couple's trip to France follows an exciting summer for the Hollywood stars. Jennifer wrapped the US leg of her It's My Party Tour in July and celebrated her 50th birthday. To mark the milestone occasion, the dad of two made his future wife a heartfelt video calling Jennifer "the best partner in life, the best daughter, the best mother, the best performer." “Since we’ve been together, you have made me feel like every day is my birthday. Thank you for your passion and your energy, and your inspiration and your endless pursuit to be the best at anything that you do," Alex said. “Te quiero mucho, Macha.”