Stormi Webster is ready for her close up! Kylie Jenner and Travis Scott’s 18-month-old daughter made her red carpet debut on Tuesday, August 27. The occasion? None other than the premiere of her father’s Netflix documentary, Travis Scott: Look Mom I Can Fly.  Little Stormi was camera ready as she was held in her arms by her mother. As the trio walked the carpet, she was showered with kisses by her dad.

Stormi Webster made her red carpet debut at the premiere of Travis Scott: Look Mom I Can Fly

Stormi dressed for the occasion in an adorable green and brown jumpsuit. The little lady coordinated with her parents perfectly. The Antidote rapper wore a brown Tom Ford suit for the event, while Kylie sported an all-white dress. When Storm wasn’t in her parents' arms the duo kept the PDA going. Kylie, 22, and Travis, 26, walked hand-in-hand and posed for the camera. The duo also snuck in a few kisses during the special moments.

MORE: Are Kylie Jenner and Travis Scott getting married

It’s no surprise that Stormi joined her parents for the premiere as she is a big part of the film. Inside the screening, Kylie gave her followers a sneak peek of the film. “The best day of my life,” she captioned a video on her stories that showed the day that Stormi was born. After the showing, was the after party where Stormi’s parents let loose. Kylie, who changed into a black dress identical to the one she wore on the carpet, celebrated with by taking shots with her man. 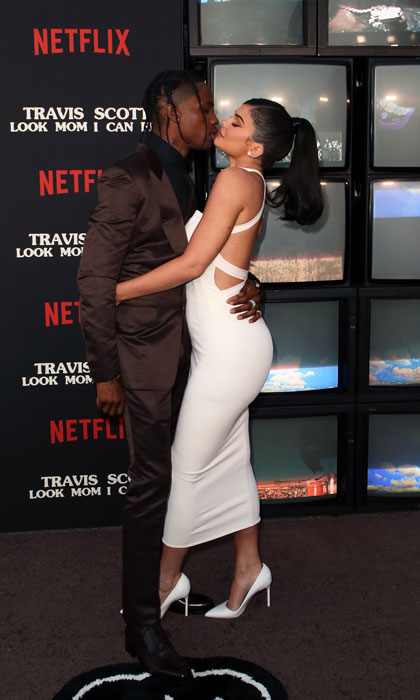 MORE: Stormi Webster makes appears on the cover of her first magazine with her mom and lovey Kris Jenner

The Kylie Cosmetics founder took to her social media to reflect on the special moment with a series of pictures from her evening. “The brown carpet. So proud of you @travisscott !!!! Look Mom I Can Fly documentary out now on @netflix.”

Travis Scott: Look Mom I can Fly is now streaming on Netflix.