John Travolta is no stranger to the dance floor. The Saturday Night Fever star showed off his fancy footwork dancing the tango in Pitbull’s new music video 3 to Tango. The video, which dropped on Friday, August 2, begins with a bald man, who is presumed to be Pitbull, dressed in a sharp suit, watching women dance. However, when the man gets up to join the lingerie-clad dancers on the floor, his surprise identity is revealed to be John. The video ends with the 60-year-old actor signing off with Pitbull’s signature phrase, “Dale!”

Kelly Preston’s husband took to social media to share the music video with his followers, writing, “Check out my friend @Pitbull’s new music video-favorite one yet! #3toTango.” Pitbull commented on the post, “The ultimate switch! 😂 Gracias for being a part of it!”

John has Mr. 305 to thank for their twinning looks. Back in May, the legendary actor revealed that Pitbull encouraged him to shave his head. "I did a movie years ago called From Paris With Love where I shaved it, so I got used to it, and some people got used to it. So it wasn’t a total shock," he confessed during an appearance on Jimmy Kimmel Live!. "And I became friends with Pitbull…All us guys have to stick together that do this. He encouraged it, as well. And the family encouraged it." 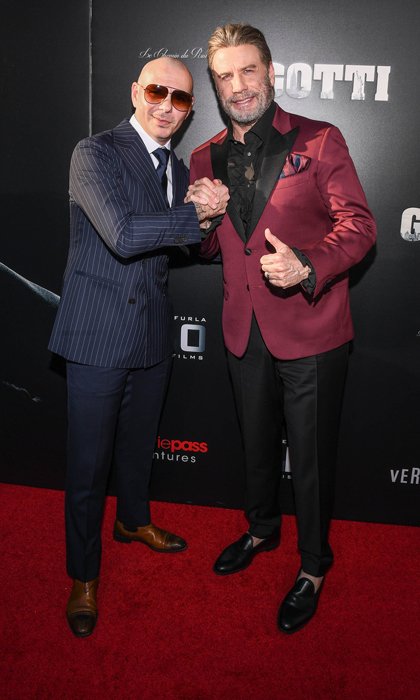 The Hollywood star and Latin singer are good friends

The actor also credited his “good friend” for his bald look in an interview with Extra earlier this year. "A good friend, Armando Perez, Pitbull, he lives his life like this," John said. "He would send me pictures of me, I have all my hair, and he'd superimpose no hair and say, 'I prefer this,' so I thought ... maybe it's time to actually do it."