Mr. West is in the building! Kim Kardashian gave the world the first close up look at her and Kanye West’s four-week-old son. “Psalm Ye,” the Keeping Up with the Kardashians star wrote next to the photo of her little boy. In the picture, little Psalm sleeps peacefully with his hands tucked away behind his head. The youngest member of the West clan is a spitting image of his big sister Chicago. The 38-year-old and the Famous rapper welcomed their fourth child via surrogate May 10. 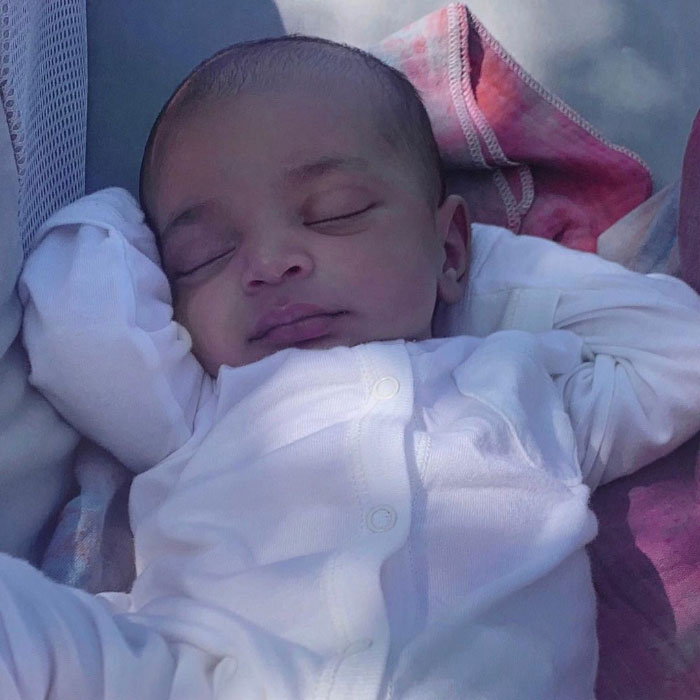 After announcing his arrival, Kim gave fans an update. “He’s here and he’s perfect,” she tweeted. “He’s also Chicago’s twin lol I’m sure he will change a lot, but for now he looks just like her.” Just days after his arrival, the KKW Beauty mogul shared the first image of her baby boy. Along with a text message chain between her and the Yeezy designer, the social media maven revealed her baby boy’s name. “Beautiful Mother’s Day with the arrival of our fourth child. We are blessed beyond measure. We have everything we need,” Kayne wrote via text. Above the chain was a picture of their baby boy sleeping soundly in his crib.

MORE: See how much these Kardashian-Jenner babies have grown in this adorable picture

Last month, Kris Jenner proudly shared the meaning behind her tenth grandchild’s name. “The inspiration was the book of psalms in the bible,” the told Entertainment Tonight. “I think it’s a wonderful way to celebrate how they feel. He’s such a blessing so it’s perfect. He’s just adorable.” KiYe are also parents to North, five, Saint, three, and one-year-old Chicago.

LOOK BACK: The moment when Psalm West was born

In 2018, the beauty mogal opened up about the special aspects of motherhood. "I have such unconditional love for my kids. No matter what, I will always love them and support them in anything they choose to do in life," she said on her website.  "My family was so close growing up; now that I'm a mom, I understand the bond my mom and dad felt with us. There can be ups and downs with kids but no matter what, I always learn so much from them. Being a mom is the most important job I have."