Gina Rodriguez is reflecting on her time on Jane the Virgin. On Wednesday, March 20, the actress, who has played the show’s title character since season one – joined the series’ creator and cast for the Paley Center’s Jane the Virgin Farewell chat. The character holds a strong significance to the 34-year-old, as the role came at a tough point of her life, when she was "29 and couldn't pay my rent." The Miss Bala revealed that she just turned down a role that her family said was a “sacrificial lamb.” When she got the audition for Jane, she had one question: “They know I’m Puerto Rican, right?” 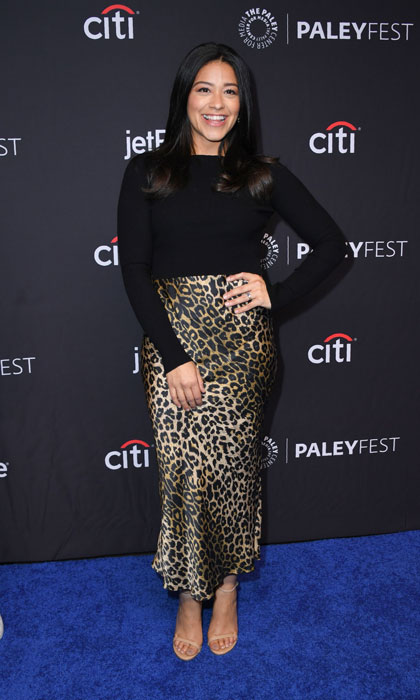 Gina Rodriguez talked about the importance of her role on Jane the Virgin Photo: Getty Images

Gina admitted that she had “fear” about the part, but when she landed the role, she knew that it would change her life. One of the most important aspects of the show was making sure that there was a positive representation of Latina women. For the Carmen Sandiego star, it was finally a chance for the women in her family to be seen. “I have been raised by such strong women,” she said during the discussion. “So, it’s lovely to continue to be around them … advised by them, protected and loved by them.”

MORE: Gina Rodriguez opens up about her wild twenties

Fan who attended the conversation also had a chace to say goodbye to fellow Jane stars, Jaime Camil, Justin Baldoni, Andrea Navedo, Yael Grobglas and Anthony Mendez. Gina and the rest of the cast will bid farewell to their beloved characters this year – at the end of season five. Good news for fans of the beloved series, it’s getting a spin-off! Earlier this year, Gina had the help of her little co-star, shared that Jane the Novelas is in the works.

“We got good news from the CW! Jane will be birthing a SPIN OFF!!!!! Jane The Novelas.” The CW confirmed the news and gave more background about the new project. “A novela anthology series in the tradition of Jane the Virgin, where each season is based on a different fictional novel “written by” Jane Villanueva and narrated by the author herself.”