Gina Rodriguez is undoubtedly one of the coolest women in Hollywood. She's accomplished—she wears statement-making dresses and is paving the way for Latinx stars to have greater representation in Hollywood—and it turns out the Latina powerhouse is also extremely relatable. During an interview with Cosmopolitan, she wasn't afraid to get personal, revealing all sorts of intimate deets – about relationships, the highly-anticipated Jane the Virgin spinoff, and her "wild" past. 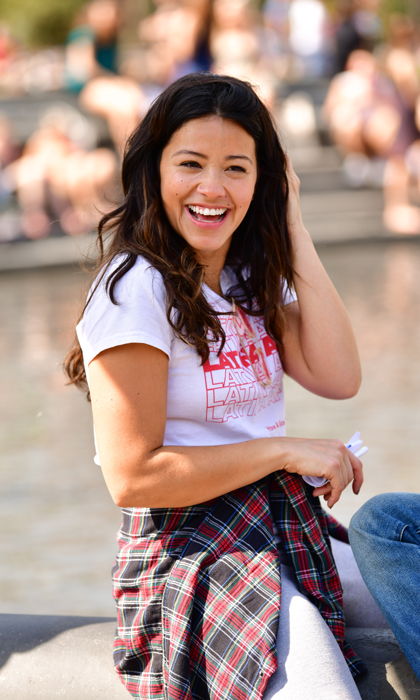 During an interview with Cosmopolitan, Gina Rodriguez revealed that she had a "wild" streak in her twenties

Apparently the 34-year-old actress had a wild streak in her 20s. "I was told by my sister at a very young age, your 20s are all about dating," she told the magazine. "Don't get married in your 20s. Date everyone, date every gender, just date like crazy and enjoy yourself. It was definitely something that I paid attention to. Part of me is really happy I did that but also happy that wild phase is done. Because I did...crazy things."

MORE: Gina Rodriguez opens up about the terrifying moment she thought she was going to die

As for the "crazy things" she did, think adrenaline-inducing activities. "I try things that scare me at least once," she said. "I started racing cars in my teens, I did graffiti, I was a loco."

Now that she's in her 30s and happily engaged to fiancé Joe Locicero, she's put that daredevil side behind her. "In my 30s, I'm not doing that as much anymore," she revealed. "When I was in my 20s I'd be like, 'Oh, bring it on, fear, yes!' Now I'm like, 'I'm good, done that, or don't want to do that.' As I get older, the more important my life becomes to me. I could definitely have gotten myself hurt pretty severely."

And for all you Jane the Virgin fans, start prepping your girls night plans because the show is going to be lit. Jane the Novela will be an anthology series and Gina will take on the narrator role. "It's the stories that Jane writes. She's the narrator," the actress explained. "They're the stories that come out of Jane's head, and ideally we'll do it like an anthology where you'll get one novella a season. I will be the new narrator, if you will."