Former President Barack Obama sent a surge of delight through New York City when he was spotted out and about with his daughter, Malia. The pair was seen getting dinner together and attending the new revival of Arthur Miller’s classic play The Price, which stars Danny DeVito and Mark Ruffalo. 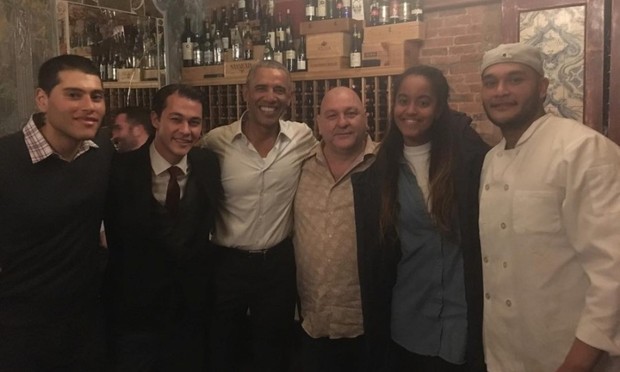 Barack and his eldest daughter first made waves on Thursday evening, while dining at Emilio’s Ballato. The old-school Italian restaurant is considered a hot spot in Soho, hosting an abundance of celebrity dinners. The owner, Emilio Vitolo, proudly shared a picture with Barack and Malia to his Instagram, writing: “Pleasure having our former president Barack Obama at Ballatos!” A fellow diner also snagged a photo of the beloved twosome as they ate what appears to be tiramisu, one of the restaurant’s signature dishes. 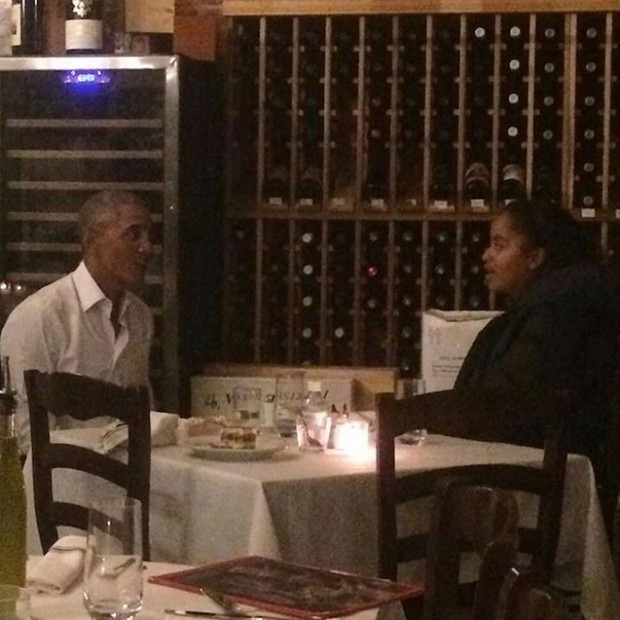 The pair looked happy as they shared tiramisu Photo: Instagram/@obamafamily44

Excitement shot to a higher level the following afternoon, when America's 44th president was seen grabbing coffee on Fifth Avenue. Social media buzzed with comments on Barack’s glowing appearance, which can likely be credited to his post-presidency vacations in Palm Springs, California, and the British Virgin Islands. Many users even posted videos, showing how Barack was met with cheers and an outpouring of love. Then, in the evening, the 55-year-old surprised theatergoers when he and his daughter squeezed in some more bonding time at a performance of The Price.

Barack Obama being greeted by a crowd while getting coffee as someone yells "SPEECH" just made my entire day  pic.twitter.com/jbVUS81GQ8

Trying to keep a low profile, the daddy-daughter duo and Valerie Jarrett, who was a senior advisor to Barack, were ushered into the American Airlines Theater on West 42nd Street just after the house lights went down. They went virtually unnoticed as they took their orchestra seats at the beginning of the show. “Well, I actually didn’t know he was sitting in the row,” a fellow audience member told the The New York Times. Despite the spectator being merely five seats away, she did not realize Obama was there. Funny enough, she was initially annoyed by their presence, thinking: “Who is so rude to come in after the show starts with the flashlights and everything?” Of course, once the woman realized the identity of the latecomers, her feelings brightened. “I had a really bad day and it all just changed.”

Before making a swift exit, Barack and his daughter joined the audience in a standing ovation. Then, they excitedly went backstage and met with the cast of the play, which not only includes Mark Ruffalo and Danny DeVito, but Tony Shalhoub and Jessica Hecht. The Roundabout Theatre Company, which produces the production, tweeted a photo of the pair with the cast, writing, "We are so honored to have had President @barackobama in our theater this evening for #ThePriceBway!" 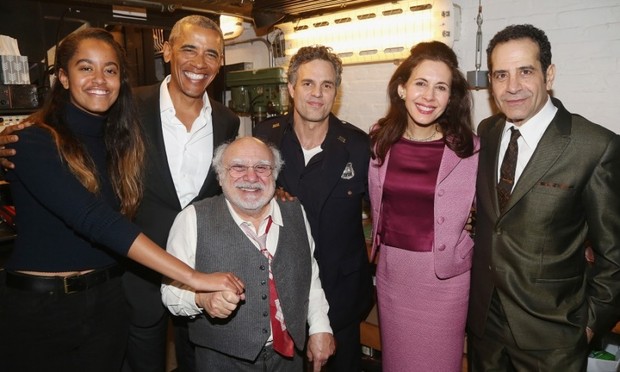 Barack and Malia posed backstage with the cast of The Price Photo: Film Magic

The Obama family is openly a big fan of Broadway, having attended several shows during Barack’s presidency. Some of them include: Hamilton, A Raisin in the Sun, Joe Turner's Come and Gone, Memphis, Kinky Boots, Spider-Man: Turn Off the Dark, Sister Act, The Trip to Bountiful, Motown the Musical and The Addams Family.

While Barack has been in the Big Apple for a collection of meetings, he is also there to visit with Malia. The 18-year-old is spending the winter in the city for her internship with The Weinstein Company. It seems she is enjoying her time there, having been seen out and about quite a bit. Barack has previously spoken about how proud he is of both Malia and his younger daughter, Sasha.