The Obamas officially handed over the White House on Friday. Now that they have begun their transition back to civilian life, Barack and Michelle are discussing what’s in store for the future. From a well-deserved family vacation to an incredible internship opportunity, the family has revealed their plans.

Shortly after the inauguration, Barack and Michelle released a video on The Obama Foundation website, discussing the their post-presidency life. After serving as the president and first lady for eight years, it seems Barack and Michelle Obama want a “little break,” first and foremost.

“We’re finally going to get some sleep and take time to be with our family, and just be still for a little bit.” Michelle said in the video, eliciting a “thumbs up” from her husband. “So, we might not be online quite as much as you’re used to seeing us.”

The Obamas embarked on a much-needed vacation to Palm Springs, California after the inauguration on Friday. They love the area and will be getting lots of rest and time with the family.

Also in the video, Barack directly addressed America, saying: "Hello everybody. After eight years in the White House, Michelle and I now rejoin all of you as private citizens. We want to thank you from the bottom of our hearts for giving us the incredible privilege of serving this country that we love.”

The couple went on to discuss their intentions for The Obama Foundation, which will primarily focus on citizenship. They asked the public to send in ideas on how the foundation could assist them. Obama finished the video by saying: "The work of perfecting our unions never finish, and we look forward to joining you in that effort as fellow citizens. Thank you, and we will see all of you again soon." 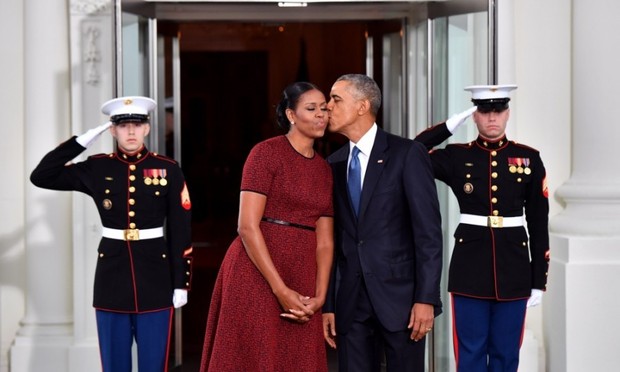 Of course, Barack and Michelle aren’t the only ones starting a new chapter of their lives. Their eldest daughter Malia plans to work with famed Hollywood producer Harvey Weinstein this year. The Hollywood Reporter confirmed the news, stating that the 18-year-old secured an internship at the New York office of The Weinstein Co., the acclaimed studio behind Oscar-winning films like The King’s Speech. A source of THR claims she may work in the marketing or development departments. Malia is set to start in February, right after the family’s return from Palm Springs.

This will not be Malia’s first taste of the entertainment industry. The former first daughter previously interned on Lena Dunham's hit HBO series Girls and also spent time on the L.A. set of Halle Berry's CBS drama Extant. Following her time with Weinstein, Malia will attend Harvard University in the Fall. 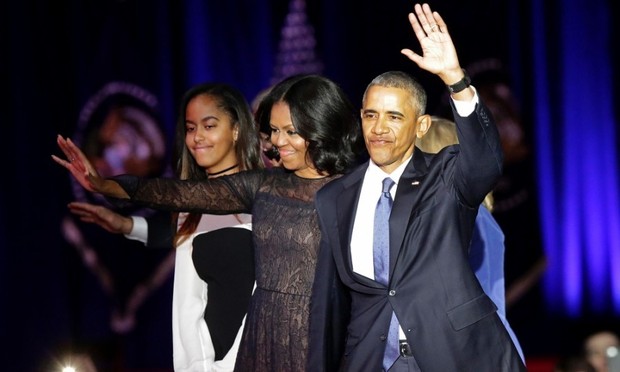 The Obamas greet supporters after the president delivered his farewell address in Chicago Photo: Getty Images

While January 19 was the last day of Obama’s time in office, Barack and Michelle also hinted about the future on Twitter. The former president, who changed his Twitter handle back to @BarackObama from @POTUS44, tweeted: “Hi everybody! Back to the original handle. Is this thing still on? Michelle and I are off on a quick vacation, then we’ll get back to work.” In a similar vein, his wife wrote: “After an extraordinary 8 years, I’ll be taking a little break. Will be back before you know it to work with you on the issues we care about.”