Two months after Justin Theroux tied the knot with Jennifer Aniston, the actor has revealed how much he loves to call her his spouse. Speaking to talk show host Ellen DeGeneres,The Leftovers actor said, “The first couple days of doing it, it’s a great feeling. You’re not saying 'fiancé'... You get to say, 'My wife'."

Though the couple are no doubt closer than ever, there's one passion they don't share: motorcycles. Avid fan Justin revealed that Jen refuses to ride on the back of his bike. "She’s gotten on like three times, but she’s done with it – she doesn’t want to do it anymore," he said. "She does not like it. She doesn’t feel in control sitting behind someone driving fast on a motorcycle. Which I understand – I wouldn’t want to sit behind someone." 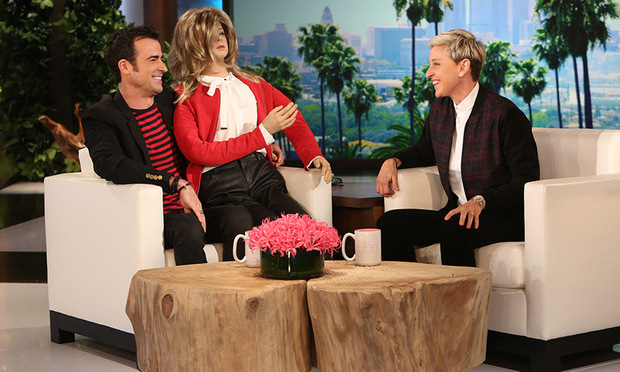 To remedy Justin's situation, Ellen offered up a substitute: a life-sized Jennifer Aniston doll to take with him on his rides. "It's unbelievable the resemblance!" he laughed.

Of course, the handsome star also discussed his recent surprise nuptials and how he and Jen were able to keep it a secret. The 44-year-old revealed that although friends with busy schedules were informed that it was a wedding, the majority of pals thought they were invited to a birthday party.

“So then afterwards we kind of realized that was a terrible plan," he noted. "You’re basically telling half your guests, 'You’re unemployed and we can’t trust you.' Which, of course, is not the case!

"We just sort of put it out there, and if people said, 'We can’t’, we really put more pressure on them to be at the ‘birthday’. There were people there who were just in jeans!"

Justin and Jennifer famously said their vows in a beautiful Los Angeles ceremony in August attended by several of the couple’s celebrity pals including Courteney Cox and Emily Blunt. Since the covert nups – which were followed by a friend-filled Bora Bora honeymoon – several anecdotes have come to light, from Jimmy Kimmel's tears as he officiated, to Howard Stern's impromptu dance with Orlando Bloom.