The ESPY Awards on Wednesday weren’t just for athletes. Hollywood’s A-list came out in force to honor the sporting world’s best and brightest in Los Angeles. Ben Affleck joked on stage about heartbreak, although it had nothing to do with the recent news that he’s splitting from his wife of 10 years, actress Jennifer Garner. He presented the Icon Award to the legendary New York Yankee Derek Jeter, who retired in 2014 after 20 years with the team. 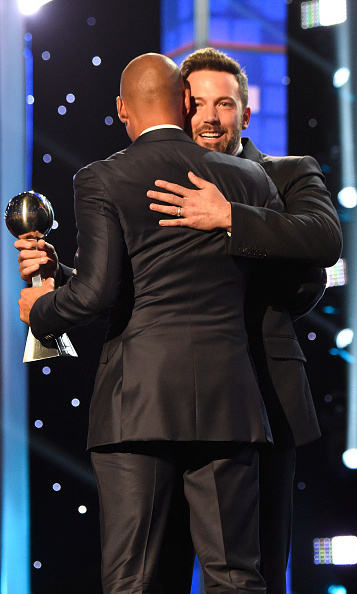 Ben's ring was clearly on display despite the news that he and Jennifer have split Photo: Getty Images

“He broke my heart 100 times, if not more. And he broke it again when he retired, because he was absolutely one of the very best ever to play the game of baseball,” said Ben, who despite the divorce announcement appeared on stage with his wedding ring. “I thank you for every last moment of your incredible career. You made the game better for everyone.” 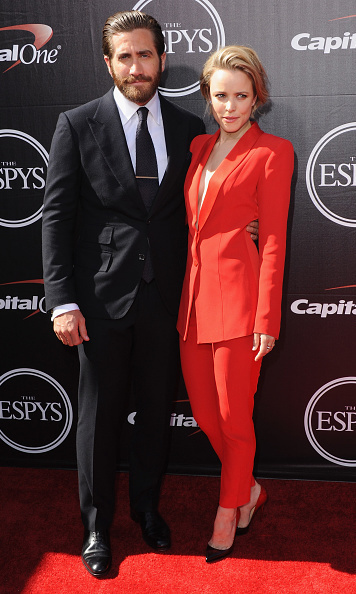 Actress Rachel McAdams, who turned heads in a bright red pants suit, paired with black stilettos, hit the red carpet with Southpaw co-star Jake Gyllenhaal, before presenting football player Peyton Manning with the award for Best Record Breaking Performance. Though Rachel and Jake were rumored to have dated in the past, the 36-year-old actress has more recently been linked to True Detective co-star Taylor Kitsch, something that she has yet to deny outright. “It’s funny the things the Internet likes to proclaim,” she said in an interview with ET on Monday. 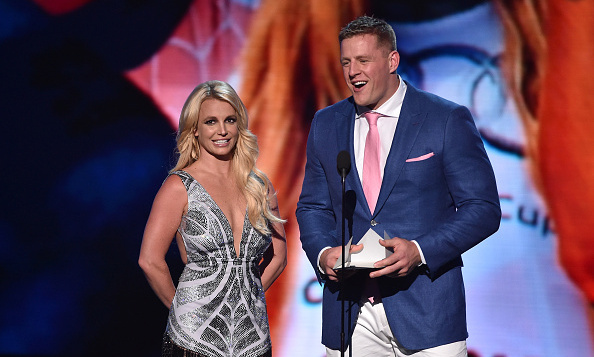 Other stars at the glamorous awards included singer Britney Spears, who presented the trophy for Best Female Athlete in a shimmering silver cut-out dress. The singer is now performing her show in Las Vegas and was towered over on stage by NFL linebacker J.J. Watt, who joked that her song Hit Me Baby inspired him not to tackle other players, but that he could be “strong in the face of loneliness.” 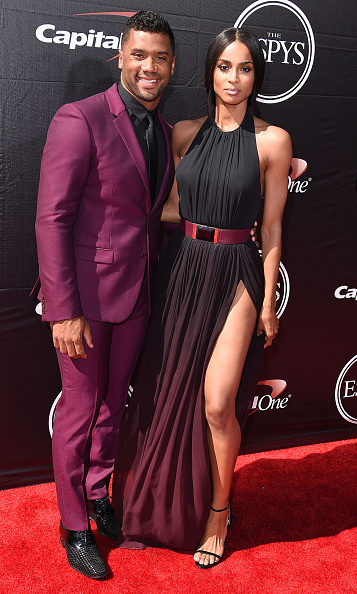 Ciara and Russell Wilson made for a super chic couple Photo: Getty Images

Ciara was another singer on the red carpet, holding hands with her quarterback boyfriend Russell Wilson, who made headlines earlier this month when he revealed in an interview with The Rock Church that he and his girlfriend plan to stay celibate until marriage.

Halle Berry looked stunning in a black leather and lace dress and presented the Pat Tillman Award for Service to basketball player Danielle Green, who was injured in Iraq.

In one of the more emotional moments of the evening, football player Devon Still accepted the Jimmy V Perseverance Award on behalf of his 5-year-old daughter, Leah, who is battling cancer. Devon has used his daughter’s illness to raise cancer awareness. Talking about the difficulty of leaving his family to play with his team, the Cincinnati Bengals revealed how he and his fiancé would pray together for his daughter’s health. 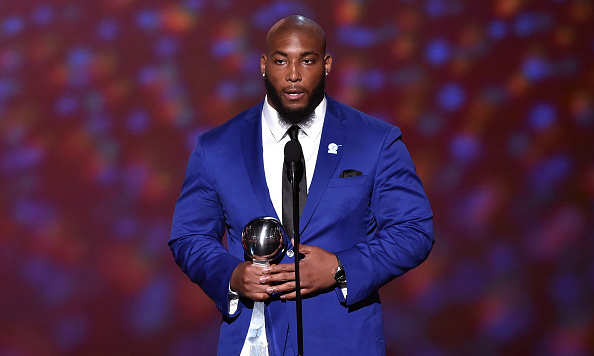 “I would grab my fiancé’s hand every night and we would drop to our knees and we would pray that we wouldn’t lose our daughter while I was in Cincinnati, and that she was able to fight so that when I got home we could make up for the time that was lost,” he said. “In that time God answered our prayers and my daughter went into remission.”

At the end of his speech, which left most of the room with misty eyes, he thanked his daughter, who was unable to attend the award. “From the moment you were born you molded me into the man I am today,” said the 26-year-old player. “You taught me more about life than I could every dream.”