The colors might be trooping, but it was easy to spot Kate Middleton in her hue of choice! As her whole family stepped out for the annual Trooping the Colour, and everyone dressed to impress on Saturday, June 8, her royal fashionista Kate was extra easy to spot in a yellow ensemble. This marks the eighth time the Duchess of Cambridge has made an appearance at the royal event. As always, the mother-of-three looked incredibly chic in a dress by none-other-than Sarah Burton for Alexander McQueen, the same designer behind her iconic wedding gown! 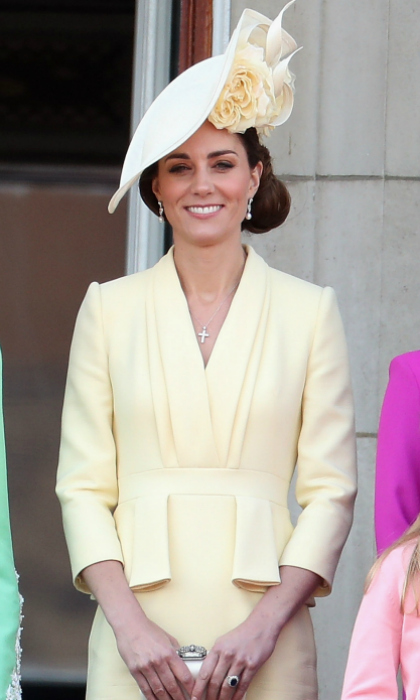 The stylish royal paired her pleated and formfitting frock with a matching yellow fascinator by Philip Treacy, which she swept her hair underneath in an elegant chignon. Adorned with an resplendent rose, this is the same hat she donned at the Duke and Duchess of Sussex's wedding over a year ago.

GALLERY: EVERY MUST-SEE PHOTO OF THE BRITISH ROYAL FAMILY AT TROOPNG THE COLOUR 2019

Incuding her own nuptials, this is by far the first time the Duchess of Cambridge has worn Alexander McQueen - the fashion house's designs are her uniform of sorts for big ocassions. In fact, last year the 37-year-old powerhouse opted for a mint-colored McQueen dress paired with a matching fascinator hat designed by Juliette Botterill to the Trooping.

The pretty-in-pastel mom was joined by her husband Prince William and their three children: Prince George, Princess Charlotte and, last but certainly not least, Prince Louis, who made his highly-anticipated debut at the annual affair. The sparkling outing was an especially significant day for the Cambridge family, as we rarely get to see them all out in full force. After taking part in the parade, she spent the rest of the event on mommy duty, doting over Louis and her two other tots.