Prince Harry and Meghan Markle have officially revealed the name of their little boy. The Duke and Duchess of Sussex chose to name their son Archie Harrison Moutbatten-Windsor. The royal pair surprised royal watchers (and betters) with the reveal, opting for a name that isn’t common in the royal family. Why the name choice? A source revealed that the new parents “simply liked the names.” Archie, is typically short for Archibald. However, the couple opted out of the full version of the moniker. Harrison, which is his middle name, means “son on Harry.” Harry, 34, and Meghan, 37, did keep royal tradition and honor the Queen and Prince Philip with their son’s last name. 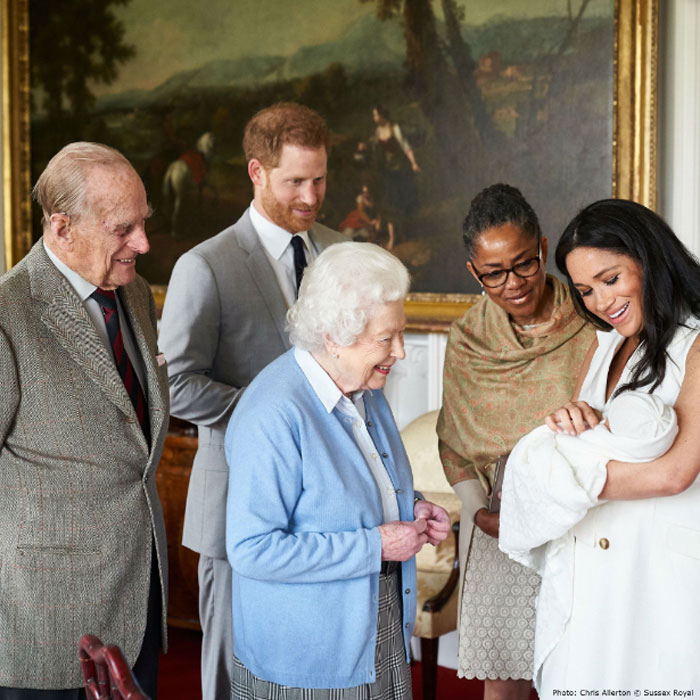 Moutbatten-Windsor is both the Queen and the Prince’s surnames and is given to their descendants. The name choice surprised many, who were betting on the names Arthur, James, Philip and Albert. The Duke and Duchess of Sussex, who welcomed their son on May 6, made the formal announcement of his name via their Sussex Royal Instagram account. “The Duke and Duchess of Sussex are pleased to announce they have named their first born child: Archie Harrison Mountbatten-Windsor.”

“This afternoon Their Royal Highnesses introduced Her Majesty The Queen to her eighth great-grandchild at Windsor Castle. The Duke of Edinburgh and The Duchess’ mother were also present for this special occasion.” Next to the announcement, was a sweet photo of Archie’s first introduction to the Queen.

The Duke and Duchess of Sussex introduced their son to the world on May 8 Photo: Getty Images

Earlier in the day, the Sussex family made their debut as a family of three. Harry, Meghan and Archie attended a photocall in St. George’s Hall. “He’s just been a dream,” the proud mom said. “It’s been a special couple of days.” When asked about their son's behavior, the pair shared. “He has the sweetest temperament he’s really calm,” Meghan said. With Harry quickly adding: “I wonder where he gets it from?”