Princess Talita von Fürstenberg kicked off her birthday week in a glamorous way. The American socialite, who turns 20 on May 7, stepped out on Monday, May 6, with her grandmother Diane von Fürstenberg for the annual Met Gala in New York City.

The college student stunned on the carpet wearing an ethereal pink gown that featured florals throughout the bodice and train. Talita completed her look with a matching flower crown. According to DVF’s Instagram, the young royal was “channeling Eve” for this year’s Costume Institute Benefit. The theme for Monday's gala was “Camp: Notes on Fashion.”

GALLERY: A LOOK AT THE 2019 MET GALA RED CARPET FASHION

While Talita was a vision in pink, her paternal grandmother, DVF, opted for a striking design that had a significant meaning. The designer opened up about her outfit choice on Instagram explaining, “Today May 6, 1944, my mother was arrested and sent to Auschwitz... 75 years later, I am going to the Met Ball as her torch of Freedom!” 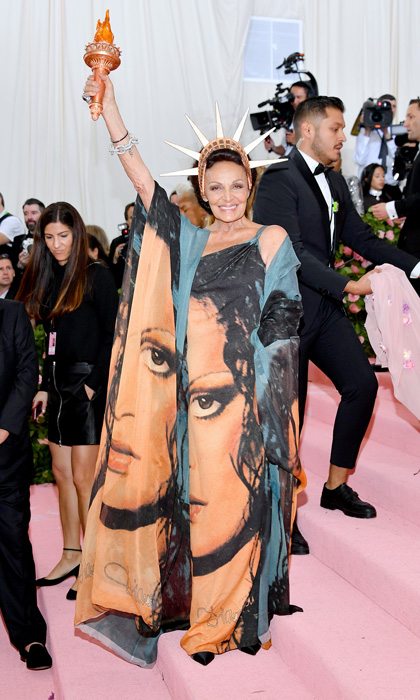 Diane’s Lady Liberty outfit included a headpiece and torch. Monday wasn't the first time DVF has brought her granddaughter Talita to fashion’s biggest night. The pair attended the Met Gala last year on Talita’s actual birthday (May 7) and in 2017. While Talita has stunned all three times at the star-studded event, she has previously admitted that her college style is a stark contrast from her red carpet looks.

“I only wear sweatpants. I don’t think my friends have seen me in anything even as structured as blue jeans,” Talita shared in a recent interview with Town and Country Magazine. “If you see me at school, it’s very different from how I am when I’m in New York. It’s as if I lead a double life.”