As excitement continues to build about the birth of Meghan Markle and Prince Harry's royal baby, the couple has made a major announcement. Meghan and Harry have decided to keep details about the arrangements for the birth of their first child private, the Palace has said in a statement. It reads: "The Duke and Duchess of Sussex are very grateful for the goodwill they have received from people throughout the United Kingdom and around the world as they prepare to welcome their baby. Their Royal Highnesses have taken a personal decision to keep the plans around the arrival of their baby private. The Duke and Duchess look forward to sharing the exciting news with everyone once they have had an opportunity to celebrate privately as a new family." 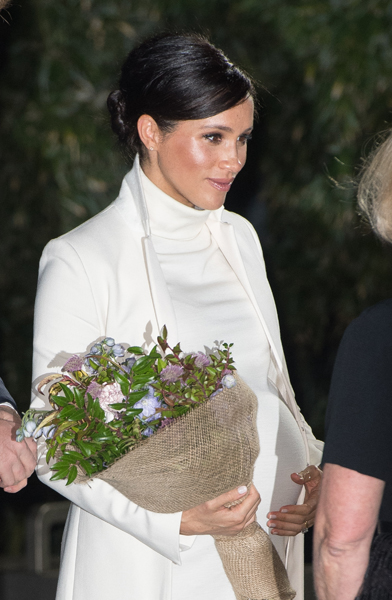 Now, with the birth of baby Sussex just weeks – or even days – away, fans are waiting patiently for the arrival of the new little royal. Meghan, 37, has previously revealed that she is due at the end of April or beginning of May and while the couple has said they are keeping the gender of their firstborn a surprise, but fans seem convinced that Meghan is having a daughter. This week, bookmakers William Hill suspended all bets on the royal baby's gender after they received an "avalanche" of bets on a girl.

RELATED: Did Meghan's BFF Serena Williams just confirm Meghan is having a girl?

RELATED: Here are all of Baby Sussex's future playmates

The location in the frame for the important delivery has been touted as Frimley Park Hospital – which is a half-hour away from their new home, Frogmore cottage in Windsor. Mothers who give birth in the facility’s most coveted room – the Mulberry Suite – get the royal treatment with double beds, low-level lighting and birthing pools. There’s also a special menu for those who wish to eat vegan. If Meghan does choose the facility, she'd be following in the footsteps of the Countess of Wessex, who welcomed Lady Louise Windsor and James Viscount Severn there. But then there's always the possibility that Meghan could follow in the footsteps of Queen Elizabeth and opt for a home birth.