The Duchess of Sussex was a lady in red as she touched down in Morocco alongside her sharply-dressed Duke. Anticipation was palpable in the air due to the couple’s delayed flight, infusing their arrival at Casablanca airport on Saturday, February 23 with an extra boost of grandeur. Meghan stole the show as she stepped out of their ride in a chic red number by Valentino, while Harry was suited up in his usual dapper fashion. The stylish couple was greeted by the Ambassador of Morocco and his wife as they officially kicked off their three-day tour.

Scroll to watch their swanky arrival! 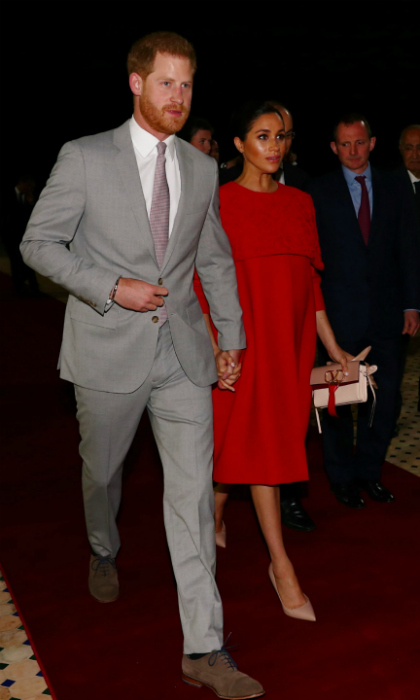 Prince Harry and Meghan Markle arrived in Casablanca late, but in style

Fresh-faced Meghan made a bold statement in her Valentino dress. The 37-year-old accessorized the knockout look with a light pink color-blocked clutch and nude gloves that matched her heels. Her most impressive feature was the stunning pregnancy glow she sported - a large feat for someone who had only just returned from a whirlwind trip to New York City, where a baby shower was held in her honor. 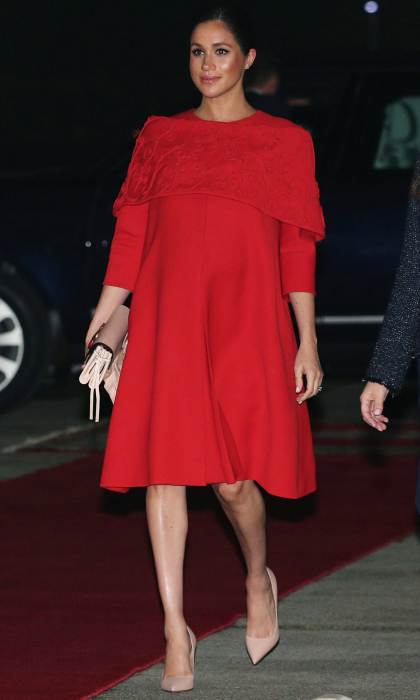 Of course, the couple’s most useful accessory is their nine-person entourage. This includes two assistant private secretaries, three communications team members, a digital officer, a program coordinator, a logistics coordinator and a hairstylist. Oddly enough, the very-pregnant Duchess is not travelling with a doctor. According to official sources from our sister magazine HELLO!: "medical provisions have been made" for the buzzing weekend trip.

Meghan's look - which has to be one the most glamorous travel outfits ever - definitely took some thought and planning by her stylists. Aside from the fact that the former actress is seven months pregnant - which obviously influences her wardrobe - she also had to cover up moreso and show respect for the country’s predominant religion of Morocco, Islam.