The stars are aligning to shower baby Sussex with love! Meghan Markle’s famous friends arrived at New York City’s The Mark Hotel for her baby shower on Wednesday, February 20. The celebrity women braved the snowy weather as they exited their vehicles and made their way inside the five-star hotel. Amal Clooney was one of the earlier guests to make a stylish entrance. The human rights attorney, and wife to George Clooney, stunned in a red jumpsuit as she made her way into the venue. 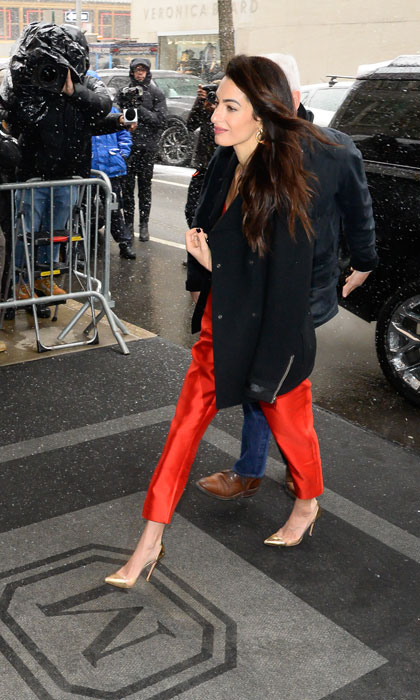 Amal Clooney was one of the guests spotted arriving at The Mark Hotel for Meghan Markle's baby shower Photo: Getty Images

A host of Meghan’s other famous girl pals made their way inside of the Manhattan location. Gayle King, Misha Nonoo, Abigail Spencer and Meghan’s best friend Jessica Mulroney were all spotted heading into the celebration. Meghan’s BFF Serena Williams is said to join Amal as host for the special occasion. It was reported that the tennis champion – who has been friends with the royal since 2010 – scouted the venue, picked the theme and will pick up the tab.

Meghan’s shower was reported to start at 12:30 est. The special affair reportedly kicked off with a flower arranging course accompanied by a sweets table – prepared by the hotel’s in-house chef Jean-Georges Vongerichten. It was speculated that Meghan’s shower was held on Tuesday, February 19. Gifts and various floral arrangements were seen being delivered to the hotel. Meghan’s former Suits co-star Abigail Spencer was seen walking in the location with a gift bag. The Duchess of Sussex's baby shower is being held in NYC Photo: Getty Images

While there was no confirmed event, the Duchess still made the best of her day in the city. The 37-year-old mommy-to-be joined Serena and good friend Markus Anderson for dinner at the Polo Bar. Prince Harry’s wife has been in the city for a “secret getaway” since Friday, February 12. The trip is said to be her final time in the United States ahead of her baby's arrival in April. Before welcoming her and Prince Harry’s bundle, the Duchess and her husband will travel to Africa at the end of the month – for a three-day tour of Morocco.