The Monaco twins have embarked on a new adventure! Princess Charlene and Prince Albert’s four-year-old twins, Prince Jacques and Princess Gabriella took their first trip to the Big Apple. The proud royal mom took to her Instagram to share some fun shots from their milestone trip to the United States. “First trip to NY [red heart emoji] Great adventure and a wonderful experience! Thank You [American flag emoji],” Charlene captioned the video. The clip shows the eager little royals enjoying various moments in the city. 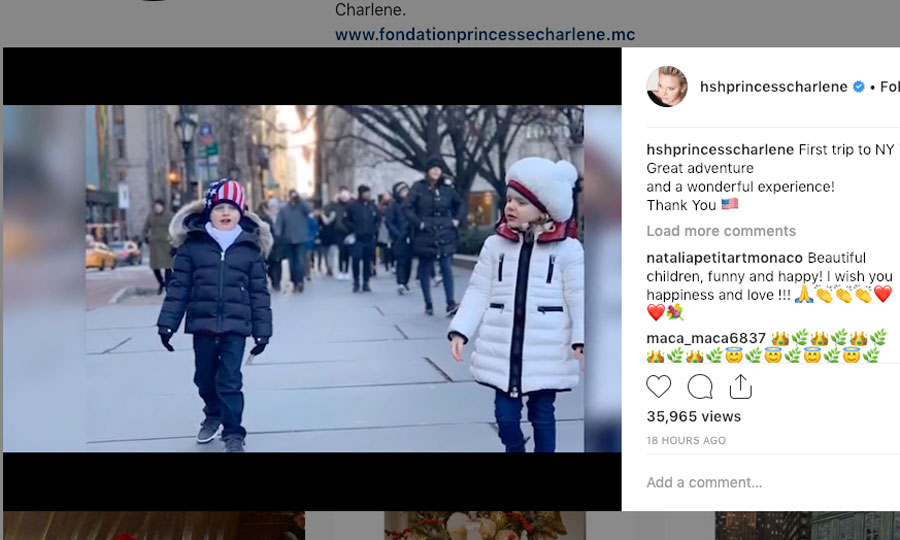 As the Jackson 5’s ABC plays in the background – a slideshow of pictures featuring the twins at the museum and catching a view of the city from the top of the Empire State building play. One photo shows the little Prince wearing a blue puffer jacket and an American flag hat, as he walks down the busy NYC street with his sister. In another hilarious moment from the trip, Gabriella stands in a hotel lobby as Spider-Man scales the wall beside her.

Albert and Charlene’s twins also took some pictures inside of the American Museum of Natural History. The adorable tourist also posed for a sweet photo in front of one of the city’s biggest landmark. “Ground Zero,” the Princess captioned the picture of her twins standing in front of the World Trade Center memorial. Jacques and Gabriella are professional travelers.

MORE: Princess Charlene gets sporty with the Monaco twins – see the pics

In November, the pair made their first trip to Paris with their parents, in celebration of the 100th anniversary of the end of World War I. Charlene took to Instagram to share a series of photos from her kids’ first-time visit in the French city of love. She captioned, “Our twin’s first trip to Paris and tea with Madame Macron.” She continued in French, “Thank you for your hospitality. We love Paris!”