It looks like Prince Harry and his lovely wife Meghan Markle are rubbing off on each other. The Duchess slipped into a British accent during a bonding trip with Queen Elizabeth last year. On Monday, the Duchess of Sussex, no doubt influenced by just being around her royal husband so much, once again pulled out that delightftul British accent for us during her visit to Birkenhead. 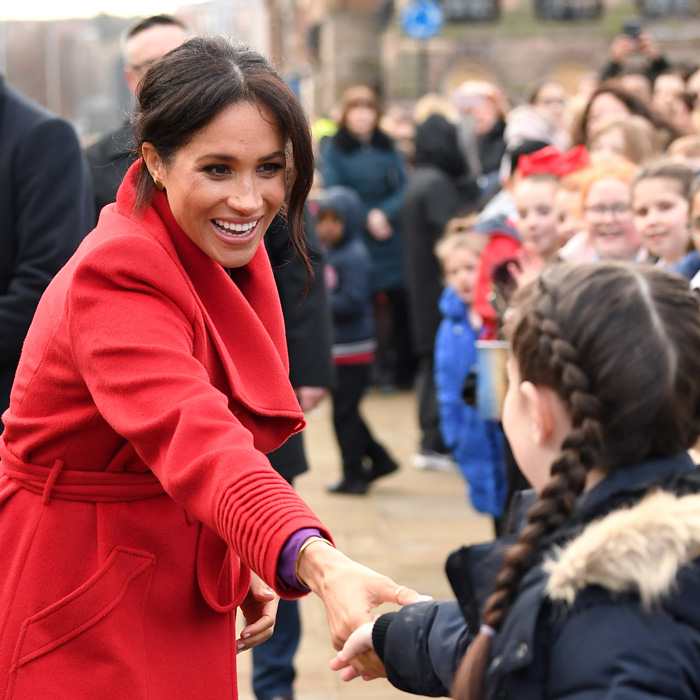 During her visit to Birkenhead, the Duchess of Sussex slipped into a British accent while greeting the crowds

The expecting royal and her husband, Prince Harry, were in town for a jam-packed schedule of engagements, but in between work, the royal duo greeted the crowd waiting to get a glimpse of them. It turned out to be a pretty revelatory engagement. According to royal reporters, Meghan revealed that she is six months pregnant and the baby is due sometime around April. And thanks to a little 9-year-old girl (shout out to Kitty Dudley), we also learned that the Duchess doesn't know the gender of the baby yet. "I asked her if she was having a girl or a boy and she said she didn't know," she told our London-based sister brand HELLO!.

But the absolute highlight of the day was when Meghan, the Duchess of Sussex slipped into a faint (but still very audible!) British accent. She started in her normal American accent while she met and wished two kids (also named Meghan and Harry) a happy birthday. But one child made a magical sign that prompted Meghan to answer in British dialect. "What a nice sign," the Duchess pleasantly said. "Did you make that for us? Thank you." She then backed away and addressed the whole crowd: "Thank you guys so much for waiting out in the cold."

As for how the Duchess is rubbing off on Prince Harry? The Duke of Sussex declared himself a feminist during a visit with women's charity Tomorrow's Women on Monday. Considering Meghan is an outspoken feminist and advocate for women's issues, it's hard not to see Prince Harry's pronouncement as having been influenced by his adoring wife's ideals.