Queen Letizia made a stylish return to her royal duties in Madrid on Tuesday, September 3, following her family’s annual summer vacation. The Spanish royal, 46, attended audiences at Zarzuela Palace stunning in a long-sleeve navy wrap dress by French brand Maje. 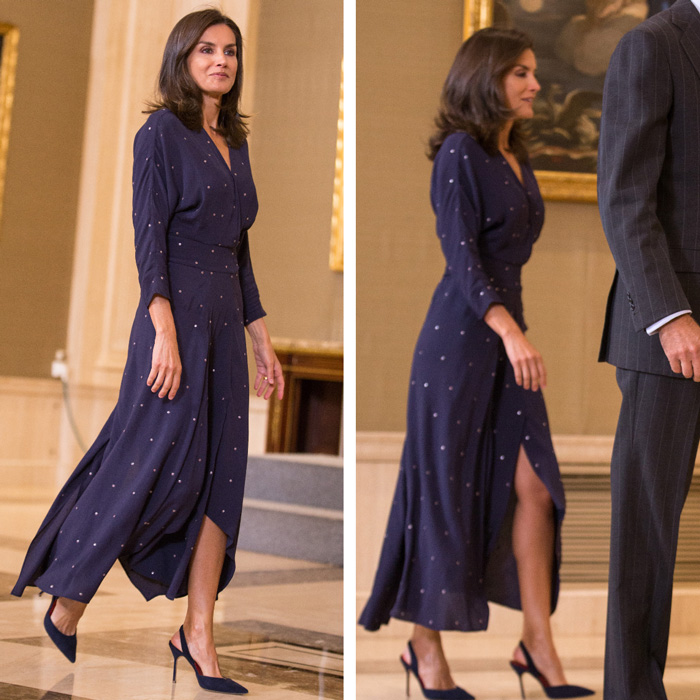 The V-neck frock, which originally retailed for $445, featured a smocked waist, as well as studs scattered throughout the design. Thanks to the asymmetric length and scarf cut, the dress showed off the mom of two’s toned legs. Letizia completed her back to work look with dark slingback heels, while styling her glossy tresses down.

It appears King Felipe’s wife drew fashion inspiration from her fellow stylish friend, Juliana Awada. The first lady of Argentina wore the same gorgeous number back in March during the Spanish royals’ visit to Buenos Aires. 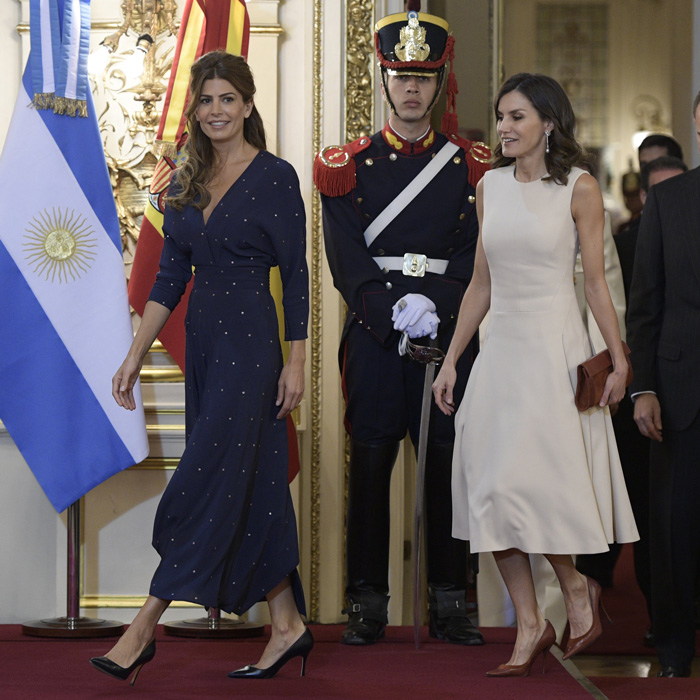 Prior to returning to work in Madrid, Letizia, along with her husband and two daughters, Princess Leonor and Infanta Sofía, vacationed in Palma de Mallorca. The Spanish royals traditionally summer at Marivent Palace on the island. During their vacation, the Queen, her daughters, and mother-in-law, Queen Sofia, enjoyed a movie date watching the Lion King. Letizia, Felipe, and their girls also visited the scenic Son Marroig museum in Palma.

MORE: The personal gift the Spanish Princesses gave their grandfather at the hospital

Last week, the Spanish royals spent time visiting Felipe's father, former King Juan Carlos at the hospital. Queen Sofia's husband recently underwent a triple bypass. Letizia and Felipe visited Juan Carlos multiple times at the hospital. On Friday, Leonor and her mom visited the 81-year-old royal together. After the hospital visit, Letizia told reporters that she saw her father-in-law "very happy" and "talkative." She added that the former King is waiting for the doctors to tell him to return home.