As the Philadelphia Eagles and the New York Patriots battled it out on the field in Minneapolis, Minnesota during Super Bowl LII on Sunday, Justin Timberlake stole the show at halftime as he performed a medley of songs such as Rock Your Body, Señorita, SexyBack and Cry Me a River, as well as a tribute to late singer Prince. Almost as talked about as his Prince tribute, though, was his choice of ensemble: a Prince of Wales-check and camouflage splatter-print suit accessorized with a red bandana, an apparent nod to country life in homage of his new album, Man of the Woods. It may have had an all American vibe, but his wardrobe actually has British roots. The ensemble was the work of designer Stella McCartney, who explained that the suit, worn over an organic cotton shirt featuring landscape artwork by British artist Martin Ridley, was inspired by her upcoming fall/winter 2018 Stella McCartney menswear collection. 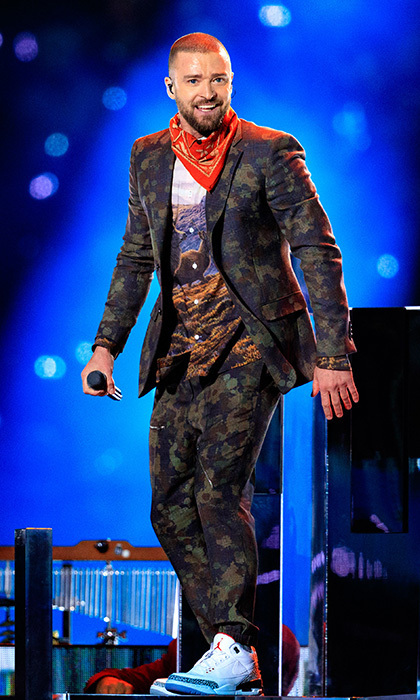 During the performance, Justin also wore a second custom Stella McCartney look, sporting the same camouflage pants but adding an alter-nappa fringed jacket. “He's always carried himself with style, so to dress him is a real honor," said the designer in a statement on Instagram. "The fact he chose Stella has been huge and the collaboration is one that inspires our menswear collection in so many ways.”

Justin also slipped into Air Jordan III's from the JTH collection in collaboration with Tinker Hatfield, which featured a reflective Nike swoosh emblem. The $200 shoes enjoyed a limited release on Sunday night and sold out immediately. 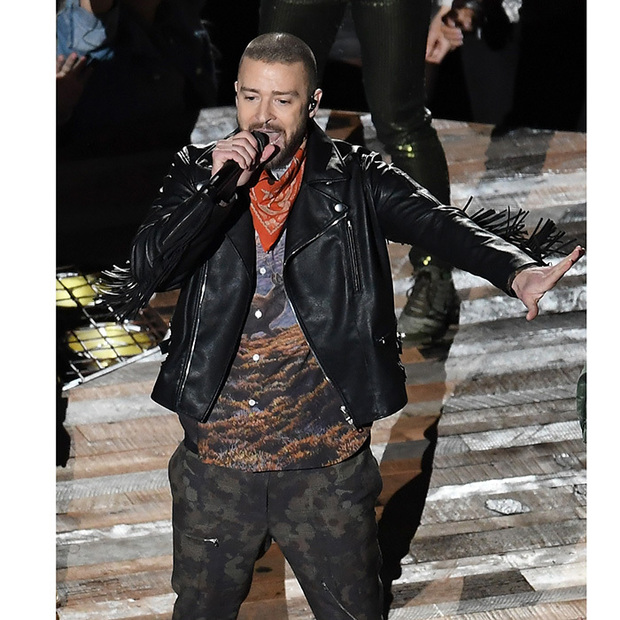 While fans had a lively Twitter discussion about the unusual outfit choice there was also a debate about Justin's Super Bowl homage to Prince in the late artist's hometown, given that Prince had been clear in the past about his disapproval of posthumous, hologram-style tributes. Justin, however, explained the choice while on The Tonight Show Starring Jimmy Fallon after the performance. “He’s such a special thing here, aside from what he is all over the world, I just felt like I wanted to do something for this city and something for him that would be the ultimate homage to what I consider the G.O.A.T. [Greatest of All Time] of musicians... I just wanted to use that opportunity to do something special for this city, but most of all, for my favorite musician of all time.”