It seems that Kim Kardashian and Kanye West's daughter North West is already a budding young designer at three-years-old. The Hollywood star's little girl apparently played a role in helping design the couple's Yeezy children's clothing line, which she modeled in Kim's Snapchat videos on Tuesday.

In the short clips, North modeled two pieces — a yellow shearling coat and yellow sequin dress — from the upcoming collection. "Wait, let me see this outfit that you've got on. Do you see this Yeezy jacket? Is that a Yeezy yellow shearling you've got on?" Kim said in the first video and North walked around in the ensemble, which she has paired with white ankle socks and black Vans sneakers. 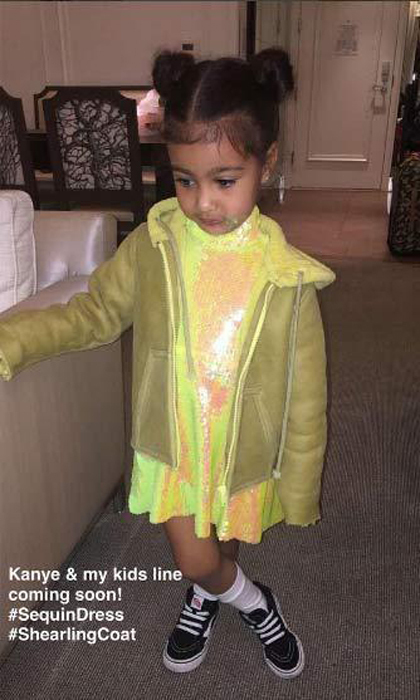 The proud mom also shared a photo of her daughter posing in the designs, adding the caption, "Kanye & my kids line coming soon! #SequinDress #ShearlingCoat." In another video, Kim told fans that North had been involved in designing the collection saying: "Hey, where's our model? See daddy and mommy are doing a kids line and these are some of the pieces. Northie picked out the colors and the fabric."

The reality star previously revealed in August that North had begun designing her own clothes during a visit to Kanye's design office in New York. The 36-year-old made the revelation on Twitter in response to Fashionista, who described North as a "little fashion icon." "She designed her own dress today in her dad's office & is picking out fabrics tomorrow! She loves fashion!!" Kim replied.

North apparently helped to design the clothes and choose the fabrics

In addition to designing a children's collection with her daughter, Kim has also revealed that she is saving "everything" including her iconic red carpet gowns for her little girl to have one day.

THE MOST STYLISH CELEBRITY KIDS

"All my Met dresses," Kim told People, when asked what outfits North will inherit. "Maybe she'll want to wear one to prom. Everything I have is for her, and she'll look at it and say, 'Can I wear that one day,' and I'm like, 'Yes, you can,' and she'll say, 'Okay, I'm gonna go eat my vegetables, but I'll be back and be big.'"