Melania Trump kicked off her first lady wardrobe on a high note last week. The characteristically stylish wife of President Donald Trump wowed fashion fans during her various inauguration outings. While the topic of dressing the new first lady proved to be a controversial debate following the historic 2016 election, the 46-year-old stunned wearing an array of familiar and not so well-known labels for her husband’s inaugural festivities. 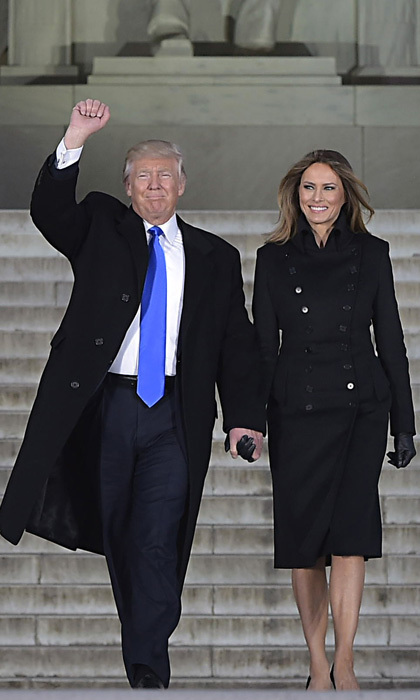 In a statement, the designer said, “I was honored to dress the First Lady of the United States for her visit to Arlington Cemetery. Throughout American history, our military personnel have faced difficult circumstances with courage and bravery. The men and women interred at Arlington gave the ultimate sacrifice for our country, as did their families who lost loved ones. We owe them our reverence and support.”

She added, “Mrs. Trump’s visit to Arlington was particularly poignant for me, as my biological father is a wounded veteran. His experience, and the lifelong disabilities he sustained, affected my family deeply. I have immense gratitude for all our armed forces and hope we can move forward with the intention of peace and healing for our country and the world.” 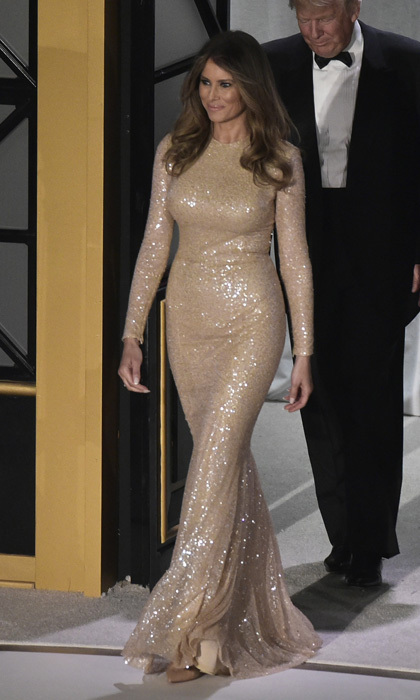 In an interview with Women’s Wear Daily, the New York-based designer admitted that she was opposed to the discrimination Melania faced from other designers who refused to dress her. “I wanted to give her her own voice. Empowering women is all that matters to me. I do not discriminate whether for race, religion, color of skin, sexuality, political affiliation,” Norisol said. “I really saw a person who is being misunderstood who is being scrutinized. She’s a woman and a mother and I am pro-woman. That at the end of the day is very important to me — equality for women and for all human beings. If that’s what I really believe, I had to do it.”

BEHIND THE SCENES OF THE 2017 INAUGURATION

Later that day, Barron Trump's mother traded her military coat for a dazzling long-sleeve gold gown by Lebanese-born designer Reem Acra for a candlelight dinner at D.C.'s Union Station. The fashion house shared a photo on Instagram of Melania wearing the stunning creation, which they simply captioned, "The First Lady of the United States. #ReemAcra." 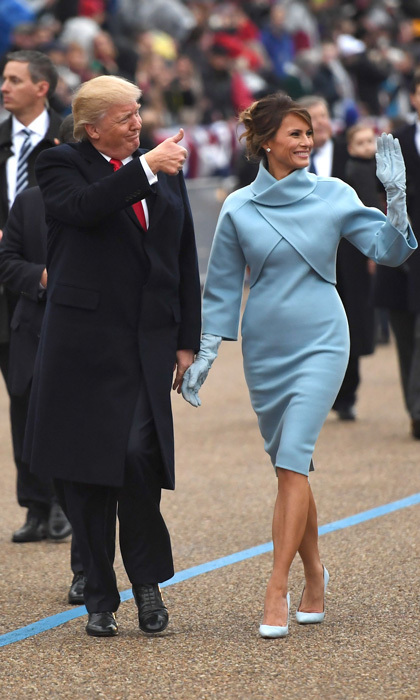 Among other labels worn during the inauguration festivities was Ralph Lauren. Melania donned a sophisticated powder blue ensemble inspired by Jackie Kennedy, which was designed by the American designer for President Trump’s inauguration ceremony on January 20. Melania exuded elegance wearing the doubleface jacket that featured a collar cutaway, which she paired with a matching mock-turtle dress.

HIGHLIGHTS FROM THE 2017 INAUGURATION

Ralph’s decision to dress the first lady stemmed from his respect for the historic event. In a statement a spokesman said, “The presidential inauguration is a time for the United States to look our best to the world. It was important to us to uphold and celebrate the tradition of creating iconic American style for this moment.”

For the night of celebration, Mrs. Trump stepped out in a vanilla silk gown designed by herself and Hervé Pierre which was worn during the Liberty Ball, Salute to the Armed Forces Ball and the Freedom Ball. 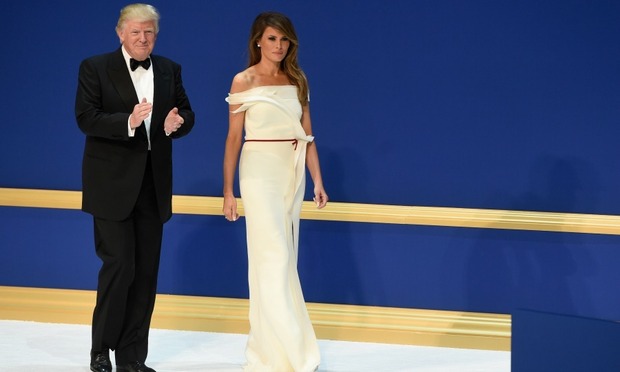 Hervé who called the collaboration with the new first lady "organic," revealed that he has dressed previous first ladies and wouldn't have passed up the chance to do it again. “It’s an honor to dress the First Lady,” the former creative director of Carolina Herrera said in a statement. “I was actually lucky because over my 20 years in the U.S., I dressed all the first ladies: Mrs. Clinton at Oscar [de la Renta], Mrs. Bush and Mrs. Obama at Carolina Herrera. So I feel lucky and honored to dress Melania Trump, but this time under my name.”

When it came to creating the gown, which was an off-the-shoulder six ply vanilla crepe with a red ribbon at the waist, Mrs. Trump's personal style was a reflection. "She knows what she likes," he said. "Our conversations were, and are, very easy. She knows about fashion, as a former model. She is aware about constructions, so we have already the same vocabulary when it comes to designing a dress.” 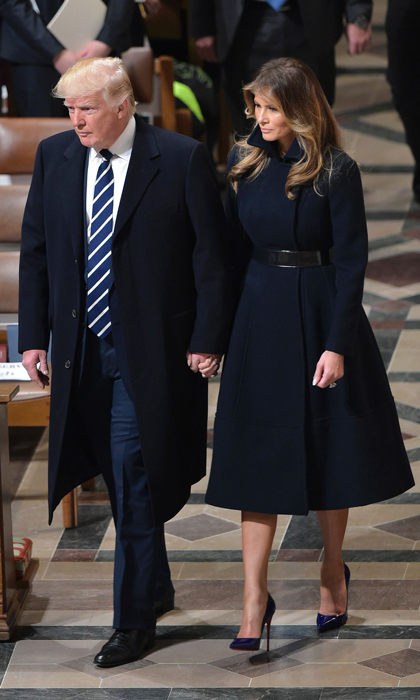 A day after her husband’s presidential inauguration, Melania stepped out to the National Prayer Service on Saturday sporting a chic navy cashmere coat, which was a collaboration between herself and Alice Roi.

“She definitely knew what she wanted. She knows clothing well and she’s very direct. She has a wonderful, chic sense of style. That’s something no matter what you put on her she kind of exudes. It’s very guiding for the designer because you know exactly what to do to get in line with her right away,” Alice told WWD. “She knows what she wants even before she sees it. And it’s always with really, really good taste. That makes it easy because you don’t have to talk somebody out of anything.”