With glowing perfect skin and a big smile, Salma Hayek proved that she is also a die-hard fan of Game of Thrones (is there anyone in the world who isn’t?). Looking lovely in a navy blue jacket, Mrs Pinault surprised her followers by sharing an image posing with the King of the North - aka Kit Harrington - himself. On this occasion, Kit showed off a sleeker look than that of his famous on-screen persona, short hair, no beard… Looking dapper, Kit!

In English and Spanish, as she usually writes her posts, Salma showed her excitement after the encounter: “I still can’t believe that I’m working with Jon Snow! Kit you’re the best!!!” In a few hours the post had more than 300,000 likes, one of them, a very special one, coming from Mother of Dragons herself Emilia Clarke. 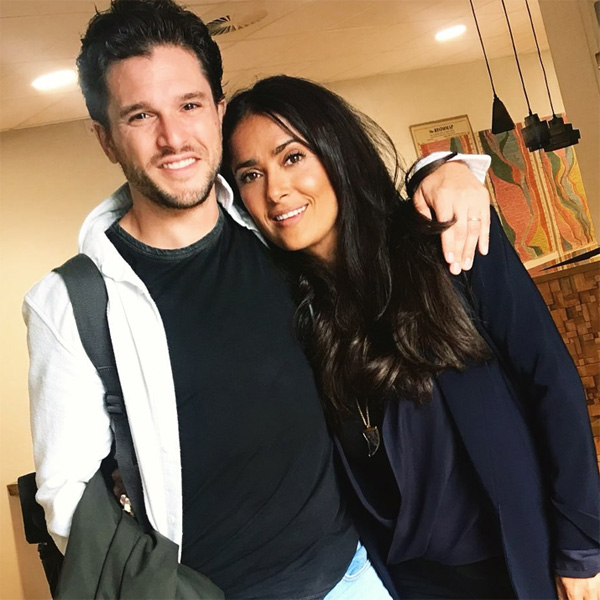 This is the happy image! Salma and Kit will join forces in The Eternals, the new Marvel´s production

Salma and Kit will take part in Marvel’s upcoming movie The Eternals, the next big thing to hit the big screen after Avengers: Endgame. Salma will play Ajak, a role that was originally a male character but as the actress revealed on her social media, has been “revamped.” She explained: “I’m so excited to join the Marvel family as Ajak, the mother of all Eternals. It used to be the father of all Eternals, but girls... this is OUR time!!!!”

This will also be the first time that fans can see the Mexican beauty and Angelina Jolie together on screen, as Brad Pitt’s ex-wife is also part of the cast along with another GOT star, Richard Madden, Gemma Chan and Kumail Nanjani among others.

As for Kit’s character - well,  he goes from the Night Watch to the Black Knight! Will he let his beard grow again for the part? Inquiring minds want to know! The English actor will portray Dane Whitman, a  hero who - according to the comics - might be the love interest of Ajak’s daughter Sersi, played by Gemma Chan.