Nick Jonas doesn’t mind his wife’s latest mix up. Over the weekend, Priyanka Chopra took to her social media to congratulate her husband on the launch of his Villa One tequila with a sweet picture from the party in Montauk. “So proud. When you own your own tequila at 27! @villaone,” she wrote next to the photo. Fans quickly took noticed and pointed out Mrs. Jonas’ error. “When you don’t know how old your own husband is…he’s a tequila owner at 26 actually,” one fan wrote. “Guess his age really didn’t matter.” Another fan chimed in: “He’s actually 26 not 27.” Many of the Isn’t It Romantic actress' followers didn’t mind the mix up and continued to praise her husband’s success. One person who really took no issue was Nick, who sweetly wrote in the comments under the picture: “My forever date.” Poking fun at the moment, the Cool singer, who turns 27 of September 16, took to his social media stories to respond with a meme. Nick shared the infamous Batman slapping a villain meme with his wife’s initials on Batman and the internet on the villain.

MORE: One thing Priyanka Chopra does that Nick Jonas loves

“It’s his bday in 2 weeks,” one bubble read. “She doesn’t know his age,” another said. The pop star cleared up all confusion. “@priyankachopra definitely knows my birthday everyone.” Priyanka, 36, and Nick had a lot to celebrate in the run up to his birthday. 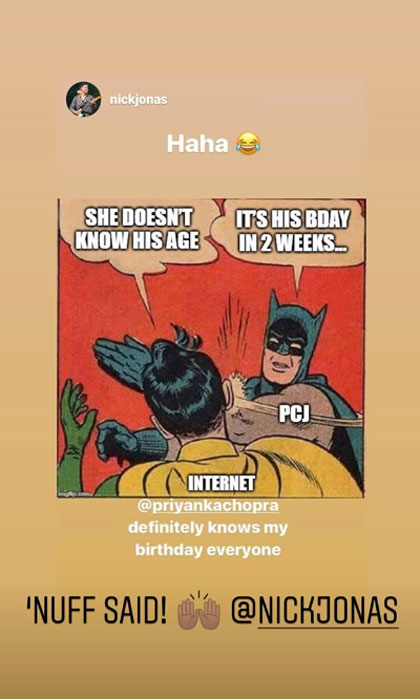 Nick hilariously responded to the backlash his wife faced from fans

Pri has been front row center with the pop star and his brothers Joe and Kevin Jonas during their Happiness Begins Tour. The actress has also been supportive of the soon to be 27-year-old’s latest venture. “She’s tried it all,” he told Entertainment Tonight about the tequila. “And she was there the first time we went to our tequila farm in Mexico and was a big part of the process.”