This year's Doodle for Google winner Arantza Peña Popo sent a strong message to the world with her art. The 18-year-old Afro-Colombian created a piece that beat out over 200,000 submissions, and one of the prizes was that her "doodle" got to be featured on Google's homepage as the company's logo. The young artist went on The Tonight Show Starring Jimmy Fallon to talk about the experience and the meaning behind the drawing. This year's theme was "When I grow up, I hope...," calling for all participants to create their vision for the future. “Well, at first, I initially wanted to do like an invention, but I wanted to make it more personal to me, so I decided to make it about my mother," the Georgia-based teen told host Jimmy Fallon. And so her piece titled "Once you get it, give it back" was created, which depicts the relationship between her and her mother. In the sketch, there's a framed picture of her mother carrying her as a baby. Standing in front of the frame is an adult Arantza standing behind her now older mother. The piece tells the story of a mother helping a daughter.

MORE: Photographer to the stars: Valheria Rocha is gearing up to take over the world one picture at a time

"She’s made so many sacrifices for me, so I wanted to show me paying it back in the future," she explained. "She cared for me so much, she sacrificed so much, so I just want to care for her and make her life better in the future like she did for me." Besides getting featured in Google's homepage for the world to see, Arantza also won a $50,000 tech package for her high school, where she just graduated as Valedictorian. She also scored a $30,000 college scholarship, which she’s using towards USC this fall. 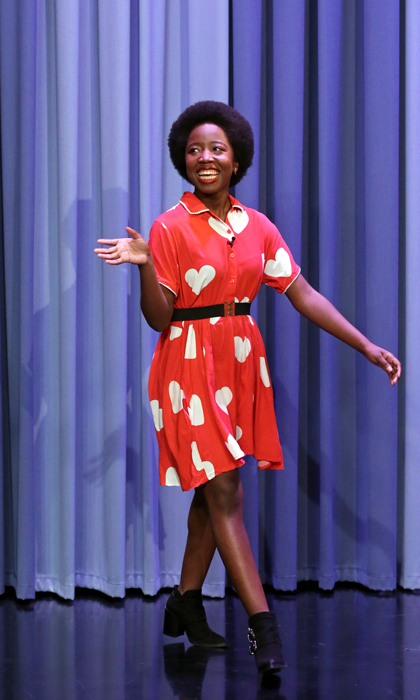 The 18-year-old's art got featured in Google's homepage

However, more than anything, this competition gave Arantza the courage to continue doing art. "I think I will have more confidence in my artwork after this experience," she said. "I honestly saw it as a little sketch, but it surprised me that it seemed to have impacted people a lot more than I thought. I guess I will take my stuff more seriously."

You can now see Arentza's art on the Google homepage.