Heidi Klum was every inch the fairytale bride at the weekend as she wed Tom Kaulitz during a gorgeous ceremony on a luxury yacht in Italy. It was her second time down the aisle with her beloved - the model and the Tokio Hotel frontman tied the knot in February, and the couple exchanged vows again in front of family and friends off the coast of Capri on Saturday. 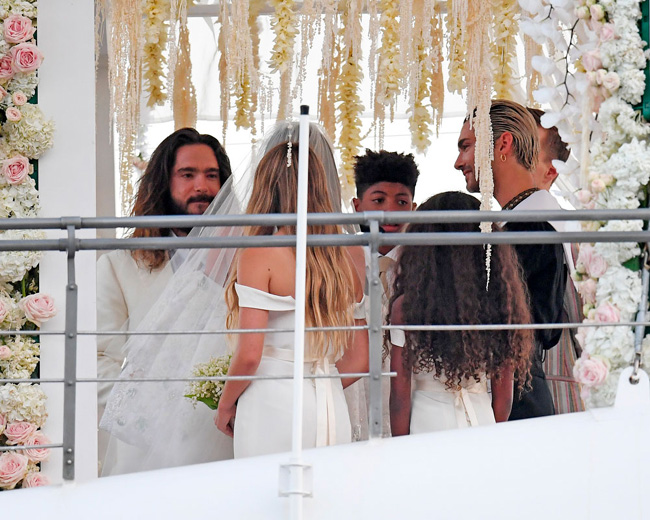 The 46-year-old beauty wore an off-the-shoulder white gown with puff sleeves and embellishments, and accessorized with gold bracelets and a necklace that spelled out "Tom." She wore her hair down with a traditional white veil, while the groom opted for an off-white suit with a light blue shirt and pocket square. The ceremony was celebrated on the ship’s deck, beneath a canopy decorated in roses and wildflowers in pastel shades of pink, green and yellow, which cascaded down upon the guests.

The bridal party included Heidi’s children Leni, 15, nine-year-old Lou, Henry, 14, and Johan, 12 – who also kept to the color scheme. The boys, in a camel-colored suit and tie with white shirts, and the girls in white, off the shoulder gowns cinched at the waist with cream-hued satin belts. Tom’s twin brother, Bill - who is also a member of Tokio Hotel - was all dressed in black to take on a Master of Ceremonies role. 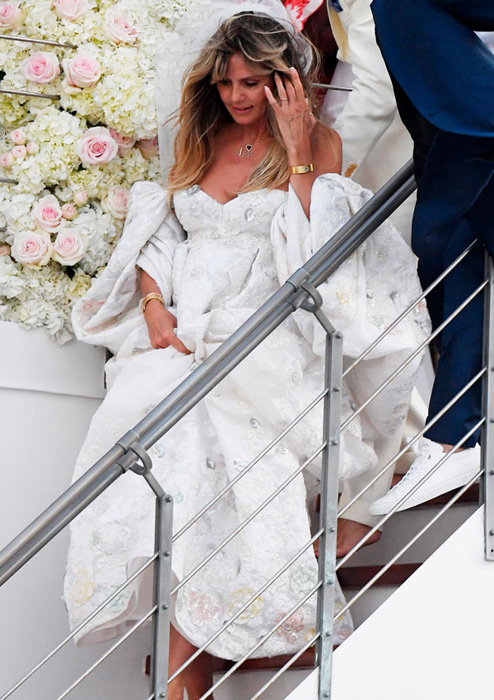 Bride on board! Heidi looked every inch the fairytale bride in her strapless gown

On Friday, the couple got celebrations underway by throwing a soiree for their guests on board the yacht, Christina O. The 325ft-long vessel was once owned by Aristotle Onassis, and was the setting for the billionaire Greek shipowner's wedding to Jacqueline Kennedy Onassis as well as the wedding receptions of Princess Grace and Prince Rainier III.

News of the couple's first low-key wedding broke last month after public records showed they obtained a confidential marriage certificate in California, just two months after they became engaged in December. This is the third marriage for the 46-year-old model. She was previously wed to stylist Ric Pipino from 1997 to 2002. She wed British singer Seal in 2005 and the couple separated in 2012 after almost seven years of marriage. Their divorce was finalized in 2014.