Prince Harry is definitely taking some style notes from musician and producer extraordinaire, Pharrell Williams. Pharrell, who co-produced the soundtrack for The Lion King remake along with Hans Zimmer (who produced the original soundtrack for the animated version) attended the golden carpet on July 15. Pharrell wore his signature tuxedo shorts combo to the European premiere of the highly-anticipated live action version of the beloved classic film. Prior to the screening, the cast, crew and all those who worked on the film lined up for the customary meet-and-greet with the Royals in attendance — cue adorable Archie's mom and dad, Prince Harry and Meghan Markle. Pharrell was standing at the front of the line, so he was the first to greet the Sussexes as they entered. Then, this royal fashion moment happened:

More: All the best pics from Meghan Markle and Beyoncé’s double date

Yup — Harry totally liked the Happy singer’s trendsetting tuxedo shorts and lets him know he does, too! And always the gracious one, Pharrell does a small curtsy as a way to say thanks to the Prince Harry for his kind words. The Lemon singer’s unexpected action sends everyone into a fit of giggles as it is not customary for men to curtsy, but breaking the rules just a little has never been something that Pharrell has ever shied from when it comes to life or his music. 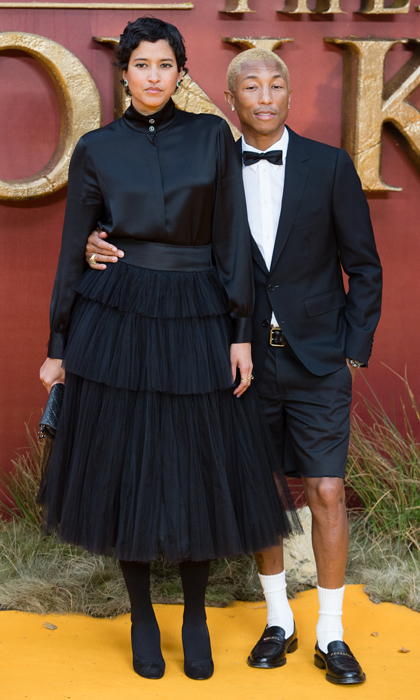 Apart from producing the The Lion King soundtrack, Pharrell also directly oversaw the work on five songs that will be included in the album

Pharrell finished off his outfit with black Chanel dress shoes, each with names etched on them (one shoe had Chanel written on, while the other shoe had his name). He was accompanied by his wife Helen Lasichanh, who he shares four children with (their son Rocket, born in 2008, and a set of triplets, born in 2017). His wife was dressed in a head-to-toe black ensemble that she paired with diamond-encrusted emerald earrings.