The day has finally arrived when we the people begin to take fashion ~inspo~ from three-year-old celebrity kids. Luna Simone AKA   Chrissy Teigen and John Legend's adorable daughter is currently on a family vacation in Italy with her parents and equally cool one-year-old brother Miles. Chrissy took to her social media to share the picture of her daughter lounging on a yacht while wearing the cutest bikini that, to be honest, we should all be wearing this summer. Just look at her! 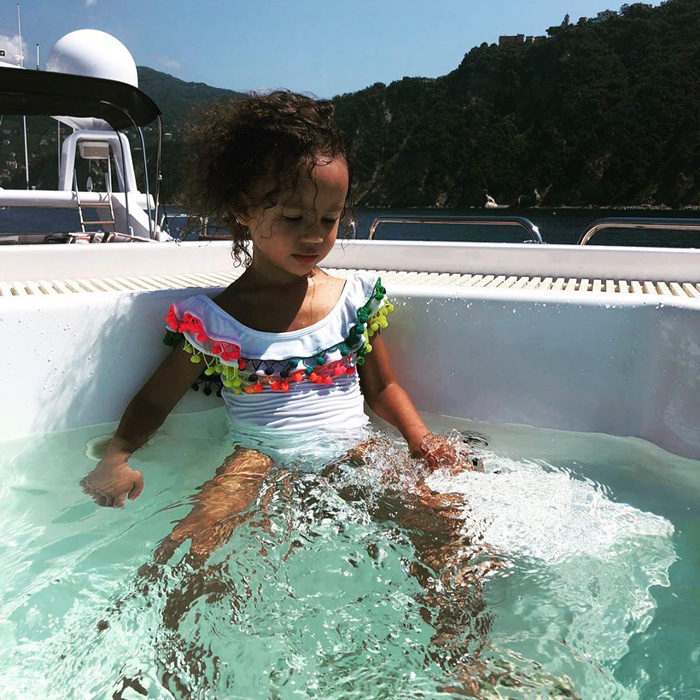 In the cool/cute/inspirational photo the Lip Sync Battle host posted on her social media feed, little Luna is enjoying the jacuzzi atop a yacht. Behind her, you can see the beautiful Italian scenery, but Luna has better things to worry about like her chic swimsuit. The white one-piece is stylish and affordable. Featuring a colorful fringe off-the-shoulder detail, the 'Cotton Candy Pom Pom One Piece' by Pily Q Kids is only $76.

Chrissy and John have been documenting their Italy trip the last few days. The All Of Me singer posted a photo of their son Miles sunbathing on the same yacht with the caption, "My happy boy in Portofino." In true Chrissy fashion, she reposted the picture, writing "John posted this but I have more followers."

The celebrity couple are always posting pictures and videos of their children. They recently hosted (and documented) a "candy court session" to negotiate whether or not Luna should get candy. In the video, Chrissy talks to Luna in a very matter of fact manner. “I now call to order the meeting of the candy. First off, Luna, I would like you to speak — tell me about why you deserve the candy,” she tells her daughter. And Luna, the QUEEN that she is, bluntly responds: “I want the candy ’cause I want it … and I like it,” 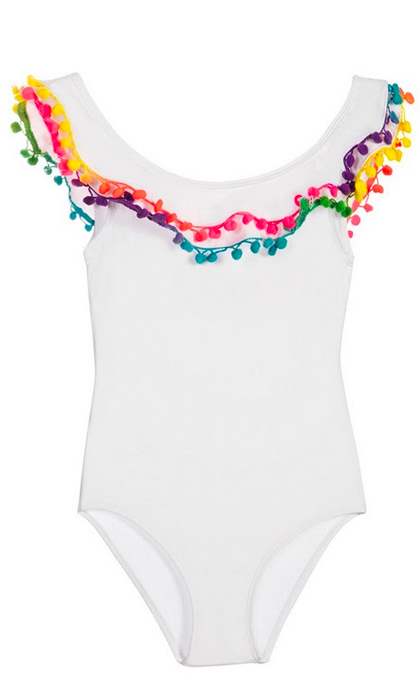 The bathing swuit is the 'Cotton Candy Pom Pom One Piece' by Pily Q Kids and is retailing for $76 Photo: @courtesy of Pily Q

Luna clearly is taking after her mom, not only with her famous meme faces, but with her sass. Still, she has some similarities with her dad when it comes to music taste. John previously revealed they bond with dancing parties. "She loves Ariana Grande. I play a bunch of older records, too, like a Curtis Mayfield or Stevie Wonder, Marvin Gaye."