Justin Timberlake might have been the biggest star competing in a celebrity golf tournament at the weekend, but the singer was easily upstaged by his four-year-old son Silas. Making an extremely rare public appearance, the cute tot came along with mom Jessica Biel to cheer on his daddy in the PGA Tour Champions Bass Pro Legends of Golf tournament at Big Cedar Lodge in Ridgedale, Missouri on Saturday, April 27. The day was full of aww-worthy father-son moments, which PGA Tour Champions showed off on their official Instagram account, much to the delight of celebrity fans.

Scroll to watch the adorable clip! 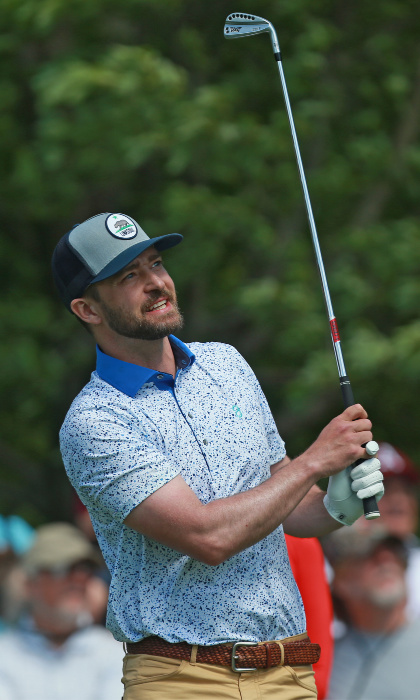 In a Justin-centered video montage , the Can’t Stop the Feeling crooner is seen carrying his tiny tot from hole to hole. Silas, who stood out in a pink polo, waved to the camera along with his golf-ready dressed daddy as spectators roared with glee. Another moment shows Justin celebrating with his delightful duo after doing well on the green.

MORE: Justin Timberlake surprises patients at a children's hospital and does the most heartfelt thing

Sitting on top of his cheering mom’s shoulders, Silas shouts along. As Justin approaches the pair, he gives his cutie pie a high five, to which Silas happily responds. Then, as JT walks away he pats his son on the back. Silas adorably mimics his famous father, reaching for his back to pat in return. The starry trio matched in polo-styled tees and sunglasses, as they showed up for what was dubbed the tournament's “family fun day.”

@justintimberlake had his two biggest supporters with him at @bassprolegendsofgolf. #LiveUnderPar

While these lovely family moments stole the show, there were indeed other celebrities at the Saturday series in the Ozarks. To name two, Mark Wahlberg and Kid Rock also enjoyed the sunny sports day with their loved ones. Each star player was paired with a PGA tour legend, like: Jack Nicklaus, Lee Trevino, Ben Crenshaw or Gary Player, who JT was with.

As far as we know, the last time Justin may have touched down in the state was for his Man of the Woods tour. He only concluded this spectacular on-the-road run two weeks prior to the outing on April 13 in Uncasville, Connecticut. “Wow. 115 shows, wrapped,” he wrote on Instagram. “THANK YOU to every single person on and off stage who kept us running for the past year and a half... and huge thank you to all of you who came out to see us. You guys are the best fans in the world. Can’t believe it’s over.”