It was an emotional day for Maluma. The 25-year-old singer premiered his song Medellin with Madonna on Wednesday, April 17. The Colombian superstar took to his Instagram to share the first moment he heard the song on the radio. “Impossible to contain the tears and the emotion after hearing this,” he captioned the video. “You do not know my happiness and what this represents for my LIFE! #Medellin available on all digital platforms. @madonna IT’S GOOD TO DREAM…I TOLD YOU!” In the video, the Mala Mia singer rides around in a car as the song plays. When Madonna’s verse starts, the singer is brought to tears. 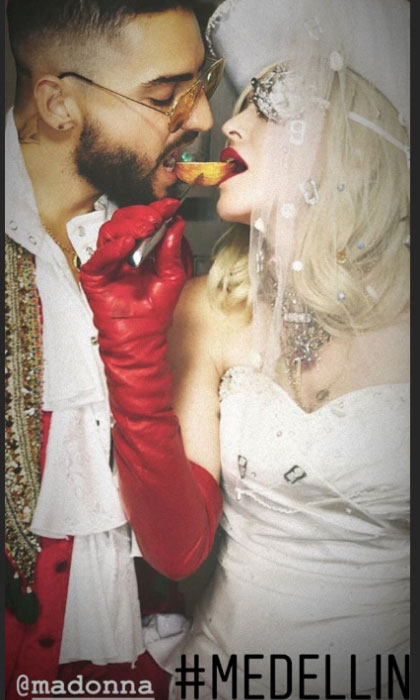 Maluma was overcome by emotion as his new single with Madonna, Medellin premiered

At the end of the clip, Maluma takes his hands away from his face and stares proudly out the window – before letting out scream. Maluma wasn’t the only person celebrating the career milestone. In the comments, the Corázon singer was flooded by love from fellow musicians, J Balvin and Becky G. One very special comment come from his girlfriend, Natalia Barulich.

MORE: Maluma makes a drastic change for a special cause – see the look

“We are all so proud of you. You deserve all these blessings because you work SO FREAKING HARD!!! Te amo baby!!!” During the world premiere of the song, Madonna opened up about working with the singer for the project. “He’s so great to work with,” she told Zane Lowe. “One of the most easygoing, open, warm and generous – doesn’t leave the studio until the work is done. Has great work ethic.” She continued: “I adore him. Nothing but great things to say about him.”

The Colombian superstar and Madge made the announcement about the single – which is the lead from her upcoming album Madame X. The musical duo took to their respective Instagram accounts to share the risqué artwork and promote the song. “MADONNA ✖️ MALUMA M & M This seems incredible, I still can not believe it, but it IS a REALITY !! On April 17 we released our song called #MEDELLIN. Medallo on the