Last year, Kylie Jenner gave a tour of her Hidden Hills home, which is aptly described as "equal parts sparkle and sumptuousness," and gave us all FOMO because she has a closet that literally holds over 400 (yes, 400!) designer handbags. While showing off her rows and rows of Birkin bags, the 21-year-old billionaire revealed a hot pink mini Birkin bag that she's holding off for the day her daughter Stormi says she wants a purse. Ladies and gentlemen, that day has finally arrived. 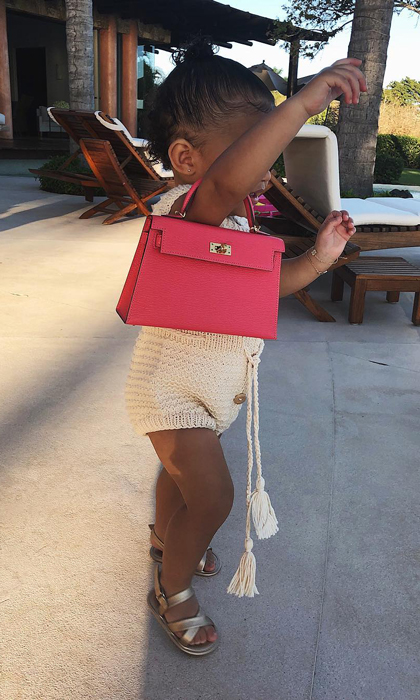 Kylie took to her Instagram to document 1-year-old Stormi happily walking with the hot pink Birkin bag. With the help of her father, Travis Scott, she walked down the steps of their backyard. "She won’t let go of that purse 👛 😫," Kylie captioned the video post.

In case you don't know, Birkin bags are incredibly expensive, ranging from $12,000 to over $20,000. As for the the smaller sized bags, those are occasionally even more expensive because of higher demand. Kylie revealed that this specific Birkin was gifted to her by her older sister Kourtney Kardashian. The Keeping Up With the Kardashians star decided to save it and have it be Stormi's first purse. “This one I’m definitely going to let Stormi wear, probably, when she says ‘Mommy, I want to carry a purse,’ so this is probably going to be her first purse,” the makeup mogul said.

Besides Birkins, Kylie also has a variety of other designer bags. “There are at least 400 bags," her interior designer Martyn Lawrence-Bullard told People. "Mostly Hermés, lots of Birkin bags and then Louis Vuitton, lots of Chanel and some Dior and Fendi. Lots of them are collector's items. She’s bought some as investments and they’re treated like works of art.”

As for what Stormi's next bag will be? No clue, but it will probably be just as fab!