Talk about a sweet sisters moment! Jennifer Lopez and her younger sis, Lynda Lopez, couldn’t be more sisterly as they walked side by side sharing a set of earphones in New York City. The Lopez sisters were spotted on location for JLo’s upcoming film Hustlers where Jennifer plays the role of an ex-stripper alongside Constance Wu, Cardi B and Lili Reinhart, among others. The 49-year-old appeared to be in-between takes as she was caught wearing a cozy grey robe and tan Ugg boots. 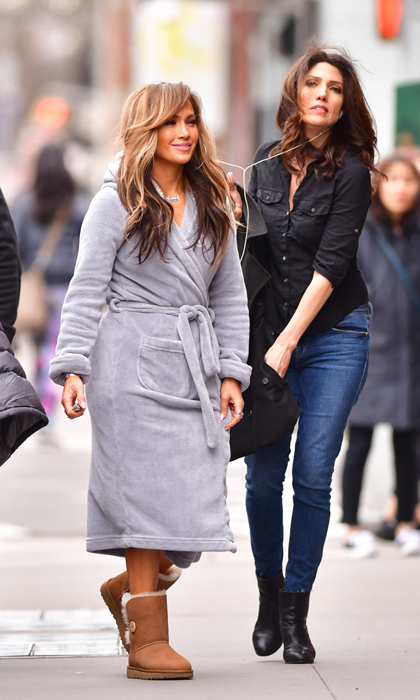 Lynda channeled downtown NYC street-style wearing skinny blue jeans, a black button up shirt and Chelsea boots. If her sis looks familiar it’s likely because you’ve seen her on TV. The 47-year-old is a journalist and Emmy-winning TV personality who works at ABC Radio and has previously worked at Fox, CW and on-air for VH1, among other prominent networks. The New York native is a viewer favorite covering lifestyle, entertainment and news stories.

Since she began filming on Monday, the Second Act star has been getting a few visits from the familia. Earlier this week, her fiancé Alex Rodriguez showed up on set with his two girls, Ella, 10 and Natasha, 14 as well as with JLo’s daughter, Emme, 11. The Limitless singer was seen leaving the set while holding hands with her mini-me, A-Rod never too far behind. The singer took to Instagram to share a sweet behind-the-scenes snap of them sitting on a couch waiting for her. 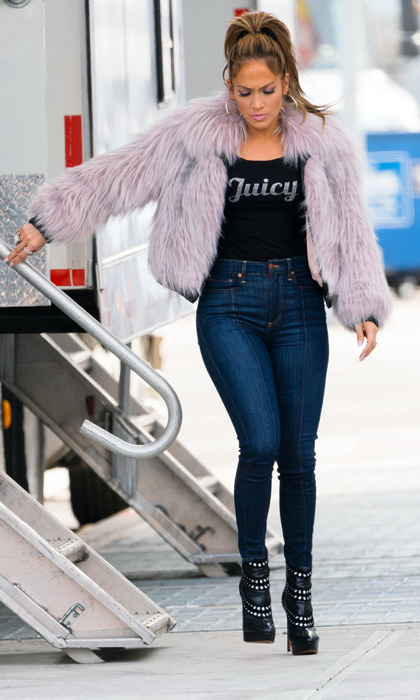 The future Mrs. Rodriguez has been working hard filming every day this week

MORE: Jennifer Lopez gets a visit from the familia on day one of Hustlers

Jennifer’s 2019 has been off to a very busy start. The future Mrs. Rodriguez has been working hard on all her current and upcoming projects including Hustlers, her It’s My Party Tour, new albums and fashion collabs all while planning a wedding. Surely JLo will rely on her strong and supportive team of women, which likely include her little sis, their mom, Guadalupe Rodríguez, Emme and of course, her bff, Leah Remini.