From the stars to the royals, no one is safe from #10yearchallenge epidemic that is taking over our Insta feeds. And as epic as Becky G's throwback to Selena Quintanilla was, there might be a new #10yearchallenge champion: Edgar Ramirez, resident stud and all-around cool guy. The Venezuelan actor just posted not one, but two jaw-dropping pics on his Instagram. And it's one of the most unique takes on the #10yearchallenge that we have seen yet. 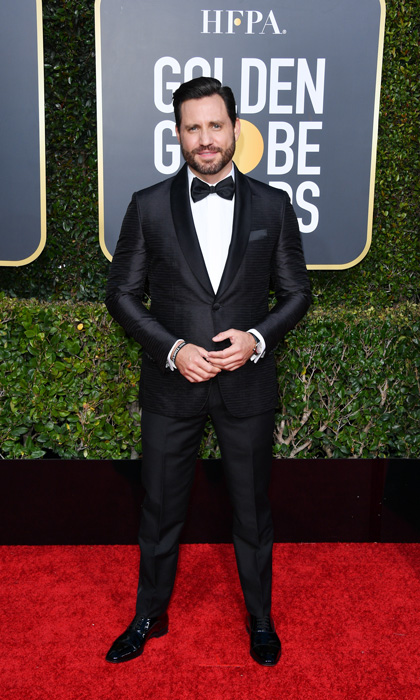 The 41-year-old actor starred as Gianni Versace in Ryan Murphy's critically-acclaimed series, The Assassination of Gianni Versace. It was a transformative role (both mentally and physically). “I had to put on some weight to fit his measurements," Edgar told Vogue last year. "That was the fun part.” But before Gianni, there was Carlos. Eight years ago, the Venezuelan actor starred in the biographical mini-series Carlos, depicting the life of Venezuelan terrorist Carlos the Jackal. Again, he had to physically transform for the role. And for his #10yearchallenge pictures, the actor chose to show just how far his appearance changed for these two characters.

"Much better taste in clothes...right? Hairy or smooth? #carlos or #versace," the actor captioned the photo. In both images, Edgar is showing off his stomach, but the left photo features a younger (and more hairy) Edgar, while the right photo shows him in his Gianni character flaunting a bare chest and a receded hairline. So method.

Besides rocking two iconic and unrecognizable looks in the last decade, Edgar has also won two Golden Globes for these projects. In another post, he proudly wrote about his achievements. "8 years ago today, I was honored to be part of a Golden Globe winning limited series...and 10 days ago, I got to be honored again," he captioned a photo that featured both his Carlos and The Assassination of Gianni Versace teams. "It never gets old and its always so incredibly touching," he said. "Thank you to the #goldenglobes for being such a big, supportive part of my wonderful time in this industry and thank you to all the immense artists I have had the privilege to work with on these two life transformative projects."