Many celebrities are taking part in the #10yearchallenge, but Becky G took it up a notch when she shared a throwback video of herself performing a Selena Quintanilla number during a Sabado Gigante appearance she made when she was just a 10-year-old girl. It's really very cute and this might be the definitive proof we need that the Mexican singer should play Selena in the upcoming Netflix docuseries. 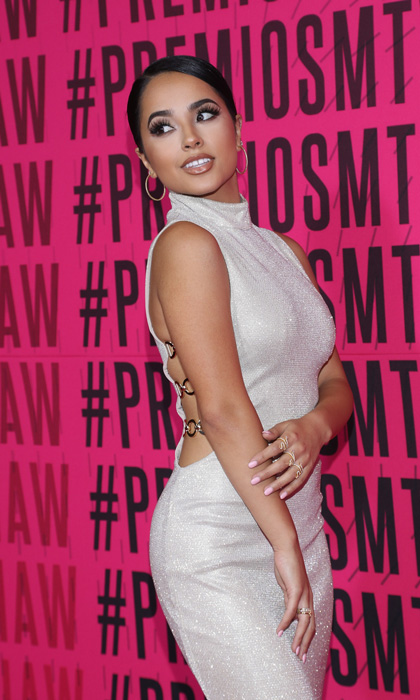 The video shows a younger Becky performing Selena's hit song Techno Cumbia while wearing the iconic purple jumpsuit Selena wore to perform the song back in the day. "I don’t even know what to caption this," the 21-year-old singer wrote in the video post. "La primera ves que fui a Miami era para “Sábado Gigante” y 10 años después todavía estoy en shock cada vez que dice mi nombre. Like HELLO my Ita would watch Sábado Gigante EVERY SATURDAY!! Don Francisco is like my tío now. What a dream."

As you can see, Becky looks and moves like Selena. At the end of her performance, she joins the real OG Don Francisco and tells him that she loves to sing and dance. She also reveals that this wasn't the first time she impersonated the late Mexican singer. And as fate would have it, it wasn't the last either. In January 2018, Becky headlined Selena Quintanilla's Fiesta de la Flor festival.

If her trajectory continues, then perhaps Becky could be (fingers crossed!) starring in the upcoming Netflix docuseries that promises to give "the full history of Selena."